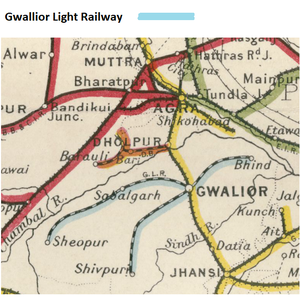 The Gwalior Light Railway(GLR) developed a series of 2' 0" Narrow Gauge(NG) branch lines, owned by the Princely Gwalior State and radiating from the city of Gwalior, originally worked by the Great Indian Peninsula Railway(GIPR).

“The Gwalior Light Railway is the property of the Gwalior Durbar by whom it was constructed and is maintained, stocked and worked. The working of the trains and traffic of the line was under the control of the Great Indian Peninsula RailwayCompany up to 30 June 1913”[1].

The ‘Ujjain-Agar Branch Railway’, opened 1932 as part of GLR (see note below)

In the early 1890s Maharaja Madhava Rao Scindia established a private 2ft gauge railway, using 20lb rails, in the grounds of his- palace at Gwalior with subsequent extensions (24lb rails) to the Mora residency, the state farm and a hunting lodge. He then opted for a much more extensive system for public traffic, using a heavier 30lb rail, and lines were opened from Gwalior north-east to Bhind (1899), south-west to Shivpuri (1899) and westwards to Sheopur Kalan (1904-9). From 1900 the railways were worked by the GIPR who took the gross receipts, deducted traffic expenses plus 12 ½ % for maintenance of accommodation and permanent way plus 10% general charges, the balance going to the Gwalior Durbar[2].

The railway was renamed Scindia State Railway in 1942 after the Scindia family who ruled Gwalior until India's independence [4].

Following partition in 1947, the Scindia State Railway came under the control of the Government of India on 1 August 1950 with a route length of 294 miles(473km). The railway became part of the ‘Central Railway’ Zone of Indian Railways on 5 November 1951 [5].

The ‘Gwalior-Sipri Section’; the ‘Gwalior-Bhind Section’ and the ‘Ujjain-Agar Branch Railway’ have apparently all closed.

Modern reports indicate that only the ‘Gwalior-Sheopur-Kalan Section’, 2ft (610mm) NG, was working in 2009 as part of the Indian Railways service. A distance of 124 miles through the suburbs of Gwalior to Sheopur Kalan [6].