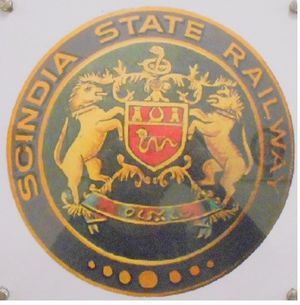 First known as the Sindia State Railway constructed as a broad gauge(BG) line from Gwalior to Agra and completed in 1881 and also described as the Agra-Gwalior Railway.

The railway, owned by Gwalior Durbar, appears to have been worked independently until 1885 when the Indian Midland Railway (IMR), a state agency, was formed to undertake the working of several existing broad gauge(BG) branch lines.

The IMR worked this line for a short time until amalgamation in 1900 into the Great Indian Peninsula Railway(GIPR) broad gauge(BG) becoming part of the ‘Midland Section GIPR Mainline’[1].

The 1918 Administation Report [1] uses the spelling Scindia State Railway in refering to this broad gauge section of the GIPR network.

The 1918 Administration Reports states “The Gwalior Light Railway was the property of the Gwalior Durbar by whom it was constructed and is maintained, stocked and worked. The working of the trains and traffic of the line was under the control of the Great Indian Peninsula RailwayCompany up to 30 June 1913”[2].

The railway was renamed Scindia State Railway in 1942 after the Scindia family who ruled Gwalior until India's independence [3].

Following partition in 1947, the Scindia State Railway came under the control of the Government of India on 1 August 1950 with a route length of 294 miles(473km). The railway became part of the Central Railway Zone of Indian Railways on 5 November 1951 [4].

The ’Gwalior-Sipri Section’; the 'Gwalior-Bhind Section’ and the Ujjain-Agar Branch Railway have apparently all closed.

Modern reports indicate that only the ’Gwalior-Sheopur-Kalan Section’, 2ft (610mm) NG, was working in 2009 as part of the Indian Railways service. A distance of 124 miles through the suburbs of Gwalior to Sheopur Kalan [5].

Prior to 1942 see Gwalior Light Railway