The Indian Midland Railway Company (IMR) was a state agency formed in 1885 to undertake the working of several existing broad gauge(BG) lines, and the construction and working of further BG lines centred on Jhansi.

The record of March 1885 states “An agreement was come to with the promoters of the Bhopal, Gwalior, and Cawnpore Railways (605 miles) in February last, as to the general terms on which a Company, to be called the Indian Midland Railway Company, was to be formed for undertaking the line in question, and a contract embodying in legal form the necessary provisions is now under consideration. The agreement is similar to that made with the Southern Mahratta Railway Company, with the modification suggested by the recent Select Committee on Indian Railways, and provides for the grant of interest at 3½ per cent on an estimated capital of £5,000,000, with one-fourth of the net earnings besides. For the first seven years, the Government also guarantee that the Company shall receive not less than 4 per cent interest per annum. [1].

The IMR had a comparatively brief existence before being amalgamated in 1900 with the Great Indian Peninsula Railway(GIPR). 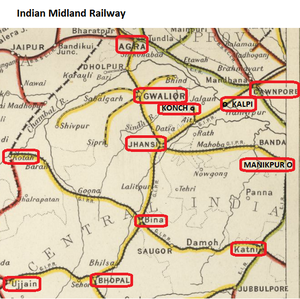 The following information is generally based on ‘The Administration Report for Railways, 1918’”[2].

Note A:- These two sections, described in some documents as the ‘Agra-Gwalior Railway’, completed 1881; Indian State line, owned by Gwalior Durbar. This railway was known as ‘Scindia State Railway’ and was handed over to the IMR under a Contract dated March 1890. [3]

Note B:- Early records describe part of this as the ‘Jhansi-Konch-Kalpi Railway’. In fact the line, when constructed, ran from Jhansi to Kalpi on onward to Cawnpore. Konch was only connected in 1903 by the GIPR ‘Ait-Kunch Branch Railway’.

Lines worked and developed by IMR

An on-line search of the IOR records relating to this railway [5] gives many references. The most important being:-

Unfortunately, there are no IMR Staff appointments held in the India Office Records at the British Library.