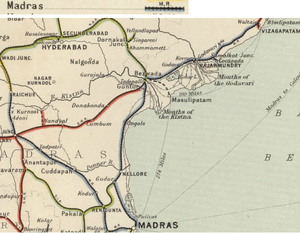 The Madras Railway Company(MR) was incorporated on 8 May 1845 [1] and the prospectus stated “the securing the introduction of the railway system into the territories under the presidency of Madras .... to depute to India a skilful engineer ...with two engineer officers ... to suggest some feasible line of moderate length as an experiment for railway communication in India” [2].

The proposal was for an initial 70 mile line between Madras and the military base at Arcot. Robert Stephenson agreed to act as Consulting Engineer based in London. The subsequent recession removed the financial incentive for railways in India and the Madras scheme was dissolved the following year [3].

The Madras Railway Company(MR) was formed provisionally in July 1852 to acquire lands in the “East Indies” and to construct and work a railway or railways in that territory. In December of that year the railway company contracted with the East India Company to construct and maintain an “experimental line of railway” from Madras to (or towards) the west coast of India. [4]

The Chief Engineer from 1853-6 was George Barclay Bruce. "He had then laid out and partly constructed about 500 miles of the Madras railway, he developed a system of carrying out works without contractors using direct labour. Also he developed the brick wells sunk by native divers system to construct the Poiney Viaduct, a major hurdle on the route [5]. .

The first section of line, from Madras to Arcot, was not opened to traffic until 1 July 1856.

In 1859, its object was given as "the construction and working of a railway from Madras to the western coast at Beypore, with branches to Bangalore and the Neilgherries; also of a line from Madras, via Bellary, to join the line from Bombay - total, about 820 miles." [6]

Headquartered in Madras, whence its lines radiated, the Madras Railway was built to Broad Gauge(BG).

In 1887, July-September, the engineer Charles Albert Bull is recorded as being deployed from the Railway Branch of the Public Works Department to undertake a survey, this would be to continue the expansion of the MR network.

It was the last guaranteed railway to fall to Government of India (GoI) ownership (31 December 1907).

On 14 April 1951, M&SMR together with SIR and MSR became Southern Railway, a zone of Indian Railways.

In addition, in 1901, the southern part of East Coast State Railway(ECSR), renamed Madras (North-East) Railway was transferred to MR and became part of the MR network.

The MR also worked several lines on behalf of other parties. The metre gauge(MG) Nilgiri Mountain Railway and the Shoranur-Cochin Railway; together with the 2ft 6in/762mm narrow gauge(NG) Morappur-Dharmapuri and Tirupattur-Krishnagiri famine protection railways owned by the Government of India.

Madras Railway – Lines owned and worked gives details of the Mainline routes together with Branches, the line lengths and dates of opening

An on-line search of the IOR records relating to this railway [7] gives many references. The most important being:-

The following have been identified from various sources:-

See Madras and Southern Mahratta Railway(M&SMR) for information from 1908 onwards.