The Madras and Southern Mahratta Railway(M&SMR) was formed in 1908 mainly from the merger of [1]:-

The former ‘Madras Guaranteed Railway Company’ contract expired on the 31 Dec 1907. The lines owned by that Company were purchased by the Secretary of State for India, and on 1 Jan 1908 the ‘Madras Railway’ (with the exception of the broad gauge ‘Jalarpet-Mangalore Section’ which was made over to the ‘South Indian Railway’) and together with the metre gauge sections of the ‘South Indian Railway’ ‘Katpadi-Gudur’ and ‘Pakala-Dharmavaram’ Sections, was made over to the ‘South Mahratta Railway Company’ for working. The enlarged Company being styled the Madras and Southern Mahratta Railway Company[1]

In addition to the lines comprised in the system, the Company, worked the ‘Birur-Shimoga Section’, the ‘Mysore-Nanjangud Section’ and ‘Mysore-Bangalore Section’, all of which were made over to the Mysore Durbar on 1 Oct 1919 [2].

On 14 April 1951, the M&SMR, the South Indian Railway(SIR) and the Mysore State Railway(MSR) merged together to become Southern Railway, a zone of Indian Railways. 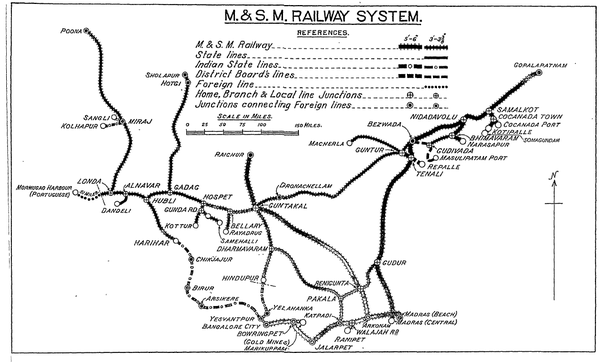 The ‘Madras and Southern Mahratta System Railway System’ can be defined as made up of the ‘M&SMR Broad Gauge Division ‘ and the M&SMR Metre Gauge Division ‘ .
The 1937 Report [2] gives the total line length of 3229 miles(5196km) as follows:-

The former MR Locomotive, Carriage and Wagon Workshops at Perambur became the M&SMR main workshops. In Madras there was a separate repair-shop for the locomotives and another for maintaining the carriages and wagons.[11]

An on-line search of the IOR records relating to this railway [12] gives many references. The most important being:-