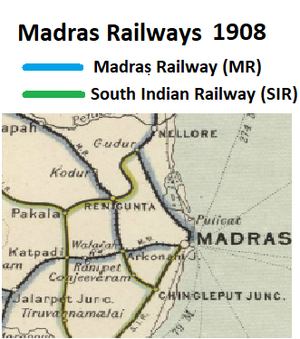 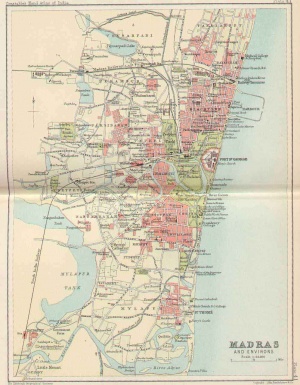 Details of each line are as follows [1]:- 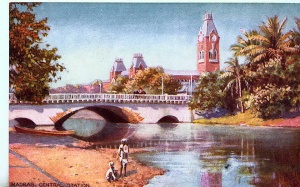 The century-old building of the railway station, designed by architect George Harding, is one of the most prominent landmarks of Chennai. The station is also a main hub for the Chennai Suburban Railway system. It lies adjacent to the current headquarters of the Southern Railway and the Ripon Building. During the British Raj, the station served as the gateway to South India, and the station is still used as a landmark for the city and the state. The station was renamed twice; first to reflect the name change of the city from Madras to Chennai in 1996 it was renamed from Madras Central to Chennai Central. In 2019 as Puratchi Thalaivar Dr. M.G. Ramachandran Central Railway Station on 5 April 2019
The ‘Madras Railway Company’ began to network South India in 1856. The first station was built at Royapuram, which remained the main station at that time. Expansion of the ‘Madras Railway’, particularly the completion of the Madras-Vyasarpadi line, called for a second station in Madras, resulting in Madras Central coming into being. Built in 1873 at Parktown as a second terminus to decongest the Royapuram harbour station, which was being utilised for port movements.
In 1907, Madras Central was made the ‘Madras Railway’ main station. The station gained prominence after the beach line was extended further south in the same year, and Royapuram was no longer a terminus for Madras. All trains were then terminated at Madras Central instead.
The ‘Madras and Southern Mahratta Railway Company’ (M&SMR) was formed in 1908 and took over the Central station from the ‘Madras Railway Company’. The station's position was further strengthened after the construction of the headquarters of the M&SMR adjacent to it in 1922.

At the same time in 1908 the ‘South Indian Railway’ (SIR) terminus was opened and named ‘Madras Egmore Station’, plans were first made of linking Madras Central and Egmore, which were later dropped.

History says that the station was actually a fort, called the Egmore Redoubt, which is a part of Santhome, Madras. It is said that the station came up in a place that once used to store ammunition for the British.
The station building was constructed on a 2.5 acres (1.0 ha) land, for which 1.8 acres (0.73 ha) was acquired from S. Pulney Andy, an English physician, who, in his letter to the 'Collector of Madras,' initially refused to sell his property owing to the difficulty with which he had purchased and developed the property. However, the ‘South Indian Railway’(SIR) Company, which was then operating train services to the south, persuaded him to sell the land, for which Andy claimed Rs.1 lakh (US$1,400) as compensation. After acquiring the land, the SIR invited Henry Irwin, CIE (chief engineer) and E. C. Bird, company architect, to design a building to suit the traffic need.
After several alterations in the plan, the construction work began in September 1905 and was completed in 1908. It was constructed by a Contractor for Rs.17 lakh.
The station was officially opened on 11 June 1908. There was initially a demand that the station be named after Robert Clive, which was, however, strongly opposed by the public as they wanted to name it Egmore. The station became the major meter-gauge terminal and served as the gateway due to its acting as a connecting point for passengers from the south to the newly formed ‘Madras and Southern Mahratta Railway -Madras Central Station ’ for boarding north,- west- and east-bound trains. With the opening of the Egmore railway station, plans were first made of linking the Madras Egmore Station to the Central Station, which was later dropped.
Irwin and Bird worked on the design of the building, which was sympathetically added to in the 1930s and 1980s. In the 1990s it was converted into a major broad gauge terminal, a role in which it became operational in 1998.