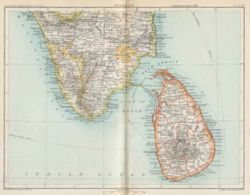 Ceylon, to the South East of Madras Presidency

The Portuguese arrived in the early 16th century, followed by the Dutch in the 17th Century with the British, as usual, arriving late - 1796 - when the British East India Company established control. In 1802 Ceylon became a British Crown Colony. The island was unified in 1815 (previously there had been three kingdoms) and the island finally gained its independence in 1948.

The Ceylon Planters Rifle Corps was a Volunteer Corps established  in 1861. Initially the movement consisted of the Ceylon Light Infantry Volunteers but by the 1900s also had Artillery, Medical, Engineers and Supply and Transport units.

The CPRC sent a contingent to South Africa in 1902 along with a detachment of the Ceylon Mounted Infantry. In 1910 the force became known as the Ceylon Defence Force.

A Corps of 150 ‘fine young Englishmen’ left Ceylon in 1914, comprised not only of planters but also Government servants, Colombo businessmen and others. They served in Egypt and were then attached to the Wellington infantry Battalion of the New Zealand Expeditionary Force in the ANZAC division at Gallipoli. The high standard of the men led to virtually all of them receiving commissions and they went on to serve in other regiments  which meant this Corps then ceased to exist. [2]

A number of men who were members of the Ceylon Volunteer Force, who were in Britain at the outbreak of WW1 were granted commissions by the War Office in the late-Summer/Autumn of 1914. Many went into the Rifle Brigade. These men, almost all of whom were involved in the plantation section, were sometimes referred to as Ceylon's "Home Contingent", to distinguish them from the "Ceylon Contingent",[3] those in the paragraph above.

FamilySearch Catalogue Search, using keyword Sri Lanka contains multiple records from digitised microfilms from the Registrar General's Office, arranged according to Registration Division, then District. The language for most of these is categorised as Sinhalese and Tamil, although the Notes indicate some records may be in English. However, of the sample records viewed, no English records were seen, although the complete files may be very large, so there could be records in English included.

Online and other databases

The North Parramatta Family History Centre in Sydney, Australia previously had the detailed indexes to the Baptisms and Marriages at the Dutch Reformed Church at Wolfendaal, Colombo, up to 1897. These were not FamilySearch microfilms but were spiral bound photocopies made from the journals and indexes at Victor Melder's Sri Lankan Library[6] in Melbourne. Update October 2019. Parramatta FHC appears to have closed, see FamilySearch Centres for possible current location of this material.

Also see Historical books online below, for the book Lapidarium-Zeylanicum : being a collection of monumental inscriptions of the Dutch-Churches and churchyards of Ceylon by Leopold Ludovici, published 1877.

Search the FamilySearch catalogue, using Keywords such as Ceylon, Sri Lanka, and filtering by Availability online, and language. There are many databases available classified as English language, of records from the Registrar-General's Department where the notes indicate the language to be “Sinhalese, English, Tamil”. Of a sample of records viewed, no records in English were sighted.

A researcher advised a trip to Sri Lanka in 2010 "uncovered masses of records in churches in Kandy, Colombo, Galle and Matara that need to be photographed ASAP... The Methodist Church seems to have centralised all records prior to 1982 in Colombo".[7] "The Anglican church records are at the Diocesan library in Colombo. The records are from churches all over the Island."[8]

Several kinds of registers of the Dutch Reformed Church at Galle and Matara are to be found in the main office of the Christian Reformed Church of Sri Lanka, in Colombo. The volumes include baptismal (1677-1807), marriage (1744-1847) and burial registers (1770-1840s), all for Galle, and a baptismal register for Matara 1776-1800. No inventory is available and some of the material is heavily damaged. In the future, the collection may be transferred to the Wolvendaal Church[9]

The Galle Face Burial Ground was opened in 1803 and located on the south side of the Fort.[10] Trying to locate this cemetery which appears to have also been the Garrison cemetery, a researcher was told that a Roman Catholic church had been built on the site and all the tombstones moved to the Kanatte cemetery. She also visited the Garrison cemetery in Kandy which has been restored [11]

Slavery and the slave trade in British India: with notices of the existence of these evils in the islands of Ceylon, Malacca, and Penang, drawn from official documents Published 1841 Google Books

Forest Life in Ceylon by W Knighton, formerly Secretary to the Ceylon Branch, Royal Asiatic Society 1854 Volume I, Volume II. This work has been described as a novel, (but somewhat against this view see further comments.[13]) William Knighton, biographical details, djo.org.uk

Ceylon Antiquary and Literary Register multiple volumes from Volume III 1917 to Vol. X 1924. Archive.org. Includes a section "Notes and Queries". HathiTrust editions, restricted to some areas such as North America.

Sketches of the natural history of Ceylon : with narratives and anecdotes illustrative of the habits and instincts of the mammalia, birds, reptiles, fishes, insects, etc. including a monograph of the elephant ... by Sir J Emerson Tennent 1861. 2nd file, with images correctly rotated. Both Archive.org

A Handbook to the Ports on the Coast of India between Calcutta and Bombay, including the Island of Ceylon by Herbert Samuel Brown, Lieutenant, R.N.R. Port and Customs Officer, Mangalore. 1897. British Library Digital Collection.

Article: "Jacob Haafner. Travels through the Island of Ceylon In 1783" by Paul Van Der Velde and Jaap De Moor.

Planters, the Planting and Other Industries

The Pioneers 1825 - 1900 : The Early British Tea and Coffee Planters and Their Way of Life by John Weatherstone. 1986. historyofceylontea.com. Also available as a pdf download, Repositori Digital, digital repository of the National Library of Malaysia.

Pdf downloads KrishiKosh: Institutional Repository of Indian National Agricultural Research System Page A and Page B. Editions from 1881 to 1960 (broken range). Archive.org editions, mainly some, but not all, mirror files from Digital Library of India