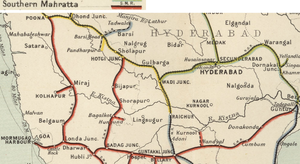 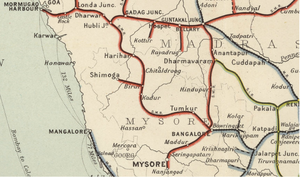 In 1881 the Bombay Eastern Deccan Railway was under construction with William Michell the Engineer-in-Charge. This line immediately upon opening became the Bijapur Branch of the Southern Mahratta Railway. [1]

The Southern Mahratta Railway (SMR) was founded in 1882 to construct a metre gauge(MG) railway between Hotgi and Gadag (opened to traffic in 1884), one of the "famine lines" set up with a guarantee. In the same year (1882), it was contracted by the Indian State of Mysore to work the several metre gauge lines that the Mysore State had built or was in the course of construction.

In 1888, a line was extended from Londa towards the Portuguese colony of Goa where it connected with the Marmagao line at Castle Rock. (From 1902 this line was leased as the West of India Portuguese Railway. By 1890, this line extended from Londa eastwards via Guntakal to Bezwada, and northwards to Poona, turning the SMR from an assortment of branches to a real railway network.

In 1908, the SMR , with a route mileage of 1687 miles(2715km), merged with sections of the ‘South Indian Railway’ to form the Madras and Southern Mahratta Railway - M&MSR Metre Gauge Division - see separate page for details

An on-line search of the India Office Records (IOR) records held at the British Library relating to this railway [2] gives several entries, the most relevant as follows: -

Unfortunately, there are no SMR Staff agreements held at the British Library in the India Office Records.

The following personnel , from the Public Works Department, are recorded as being ‘on loan’ to the Southern Mahratta Railway Company:-

See Madras and Southern Mahratta Railway for period after 1908