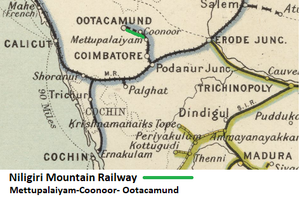 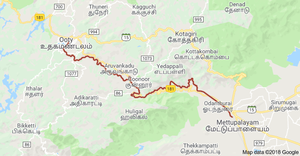 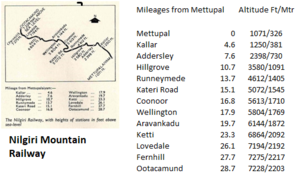 The Nilgiri Mountain Railway(NMR) is a metre gauge (MG) rack railway from Mettupalaiyam to Ootacamund, often called Ooty a distance of 28.7 miles (46km), that is today a tourist attraction and a UNESCO World Heritage Site. The line climbs from 1071 feet(326 mtrs) above sea level to 7228 feet(2203 mtrs) over this length. Diesels can only haul NMR trains on the top section between Coonoor and Ooty.

“The original Nilgri Railway Company was registered on the 30th September 1885 ... and a contract was executed with the Secretary of State on the 26th February 1886. The original Company went into liquidation in April 1894 and a new Company was formed in February 1896 to purchase the line from the former Company and supply the capital required to complete it and to construct the proposed extension to Ootacamund” [1]

The metre gauge(MG) line from Mettupalaiyam to Coonoor, a length of 17 miles (27km), was completed by the new Company and opened for traffic on 15th June 1899. The railway was initially worked by the Madras Railway(MR) Company under an agreement with the Government of India(GoI).

On the offer of the new Company to sell the line it was purchased by the Government for £235,000 on the 1st January 1903 and MR continued to work the line up to 31 December 1907. Thereafter the working was undertaken by South Indian Railway(SIR) Company.

The MG extension to Ootacamund, a further 12 miles(19km), was constructed by the Government and opened 1908

Following the opening of the Madras Railway broad gauge line from Madras to Calicut in 1862, a 26 mile, broad gauge branch from Podanur to Mettupalaiyam, the 'Mettupalaiyam Branch Line' was opened to traffic in 1873 and plans discussed to extend this into the Nilgiri Hills - the "Blue Mountains".

In 1885, the Nilgiri Railway Company was formed with construction beginning in 1891. Initially, it was intended to adopt the Rigi rack system but eventually the Abt rack system was chosen. Horace Bell continued to act in a private capacity as Consulting Engineer in London, he had in 1894 retired from his position in India as Consulting Engineer for the State Railway Board.

In 1896, a new company was formed with a guarantee (3% return during the construction period) from the Government of India(GoI) following the failure of the 1885 company.

When the Madras Railway was merged into the Madras and Southern Mahratta Railway in 1907, the NMR contract was awarded to the South Indian Railway(SIR). The railway was included as part of the 'SIR System Metre Gauge'.

Construction of the extension from Coonoor to Ootacamund was completed by the GoI Public Works Department in 1908, Robert Richard Gales was the Engineer-in-Chief on the project [2].

In due course, the NMR became part of Southern Railway, a zone of Indian Railways.