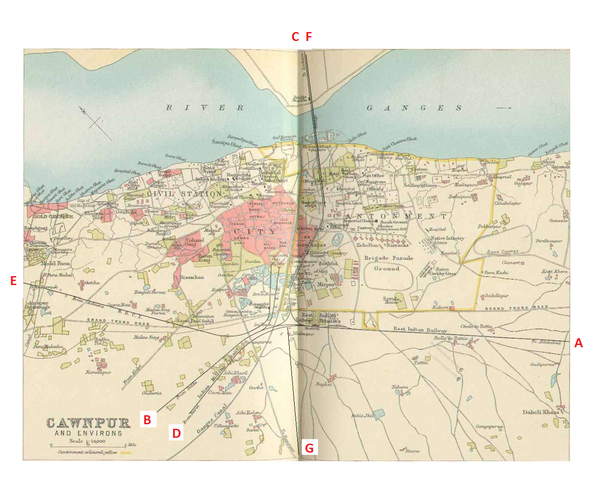 Shown on map as A from Howrah; B from Delhi
‘East Indian Railway’(EIR) Broad Gauge(BG line from Howrah opened through to Cawnpore on 3 March 1857, the line was extended to form the ‘Howrah-Delhi EIR Main Line’ reaching Delhi on 1 Jan 1867.
Passenger service for this BG railway operated initially from ‘Cawnpore City Station’ and later from ‘Cawnpore Central Station’ - see Stations below

Shown on map as C from Lucknow
‘Oudh and Rohilkhand Railway’(O&RR) Broad Gauge(BG line from Lucknow to Cawnpore, opened in 1867 to form the ‘Lucknow- Cawnpore Branch Line’ .
This BG line connected to the EIR at Cawnpore Junction
Passenger services operated from ‘Cawnpore City Station’ and later from ‘Cawnpore Central Station’ - see Stations below

Shown on map as E from Achnera
‘Bombay, Baroda and Central India Railway’ (BB&CIR) Metre Gauge(MG) line from Achnera to Cawnpore. The first section opened 1875 from Muttra as the ‘Mathura-Hathras Provincial Railway’. Extended to reach Cawnpore by 1884. and became the ‘Cawnpore-Achnera BB&CIR Main Line’
This MG line operated into ‘Cawnpore Juni Station’

Shown on map as F from Burhwal
‘Cawnpore-Burhwal Railway’ Metre Gauge(MG) line from Burwhal fully opened in 1897 and was created by adding a third rail, and in places alongside, the Broad Gauge from ‘Cawnpore -Lucknow Branch Line’ (see above) to a junction with ‘Bengal and North-Western Railway’(BNR) at Burwhal 160 km away. The line was owned by the Government of India and managed as part of the ‘Oudh and Rohilkhand Railway, which became ‘East Indian Railway’ from 1925.
This MG line operated into ‘Cawnpore Juni Station’

Shown on map as G from Kharir Junction and Banda
The Cawnpore-Banda Railway was a Metre Gauge(MG) from Cawnpore opened in 1913 and reached Khairar Junction (Khirada) in 1914, a distance of 73 miles(116km). Khairir Junction is where the line joined the ‘[[Great Indian Peninsula Railway’GIPR) 5 miles(8km) from Banda.
The Cawnpore-Banda Railway was constructed and worked as a State line by the ‘Oudh and Rohilkhand Railway’(O&RR) up to the 31 March 1915. Thereafter the maintenance, management and working of the line was taken over by the GIPR.
This MG line operated into ‘Cawnpore Juni Station’ via Govindpur Junction

Although Cawnpore was an important station on the (Broad Gauge ‘East Indian Railway’ ‘EIR Main Line’, constructed in 1857 ‘Old Cawnpore Station’ was very basic and simple. Cawnpore at that time was a very active centre of trade and industry.

The ‘Oudh and Rohilkhand Railway’(O&RR) opened the ‘Lucknow- Cawnpore Branch Line’ in 1867, this was also a (BG line and connected to the EIR and to become ‘Cawnpore Junction Station’ .

With the continued increase in traffic a new station was required, the historic building of the old ‘ Cawnpore City Station’ was built in the year 1885. The station served as the 'main' railway station until 1932 with the opening of the ‘Cawnpore Central Station’, and the old railway station building was converted to training institute for railway officers. In the year 2002, this was declared by Railway Department as “Heritage Building” [1]. 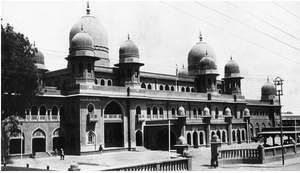 It became imperative that a new Station was constructed to handle the further traffic volume . It was decided to provide a building appropriate to the status of the city and in harmony with its cultural traditions, and it would be similar to the design of the ‘Lucknow Railway Station’. The foundation stone of the building was laid in 1928. Built in traditional Mogul architecture the building has an exquisite exterior due to a series of domes, and arches typical of the Mogul architecture. Graduated increase in the height of the structure and positioning of pointed arches in the front make it an extremely beautiful architectural monument [2].
The new station opened in 1932.

The three Metre Gauge(MG) Railways (detailed above) had their terminals at ‘Cawnpore Juhi Station’ in the western Cawnpore suburbs.
The Juhi Station was later renamed ‘Govindpuri Railway Station’ [3].

There were six depots receiving and despatching goods wagons from the five railways operating into Cawnpore. (two Broad Gauge(BG and three Metre Gauge(MG). There were points of Interchange and Transhipment between BG and MG
A 1925 survey [4] gave a weekly figure of 4620 wagons being handled at the following locations:-

Several reorganisations were implemented to increase turnaround times and divert all Goods traffic away from the ‘City Station’ to make way for the new ‘Central Station’ [4]:-