- a sub-section of the Bombay, Baroda and Central India Railway(BB&CIR) page

The Bombay, Baroda and Central India Railway(BB&CIR) owned and operated an extensive network of railways of mixed gauge

The BB&CIR also managed, worked and maintained a number of mixed gauge lines on behalf of other parties.

The listings below are generally based on the “Administration Report on Railways 1918” [1] with page numbers (and pdf pages) noted at the end of each entry.

In 1918 the total length of line being worked as the BB&CIR system (both owned lines and managed/worked lines) was 3823 miles(6150km) opened plus a further 254 miles(407km) under construction or sanctioned for construction. Page 12 (pdf 21)

By 1937 the BB&CIR System was 3611 miles(5811km) of all three gauges. This showed a reduction from the 1918 mileage
In 1921 the working of the ‘Gaekwar’s Mehsana Railway’ transferred from BB&CIR to Gaekwar's Baroda State Railway, a mileage of 193 miles of MG <br<In 1936 the working of the ‘Jaipur State Railway’ transferred from BB&CIR tand reverted to the Jaipur Durbar, a mileage of 179 miles of MG 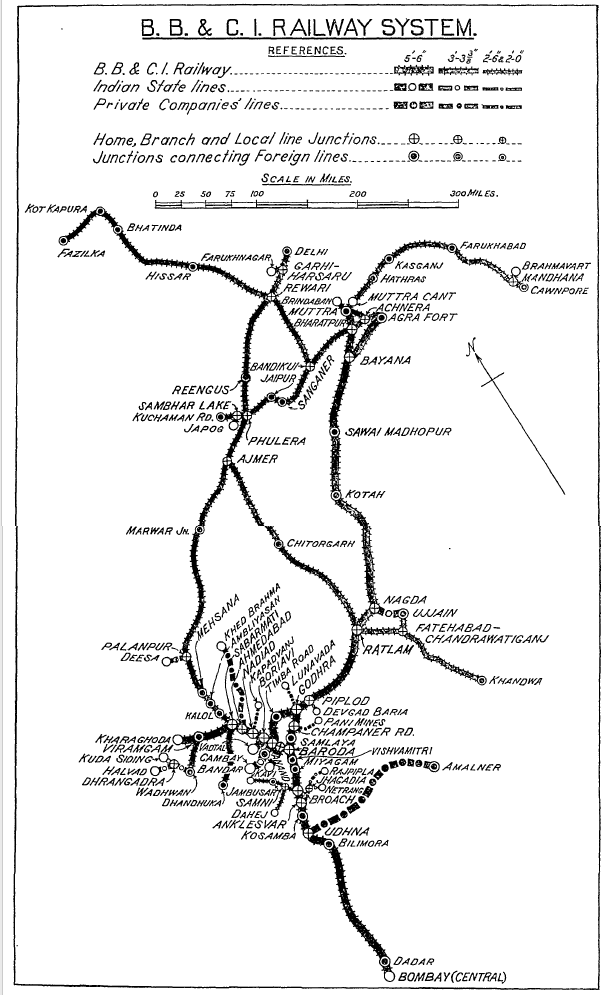 NG 2ft 6in Lines - managed, worked and maintained by BB&CIR

Not listed in 1918 Admin Report