‘Sambhar Salt Lake’ is India's largest inland salt lake, 70 km west of Jaipur was leased by the Government of India from 1869 for the production of salt by evaporation. The 'Northern India Salt Revenue Department' operated it with the first output being produced in 1870 [1].

The lake receives water from five rivers Medtha, Samaod, Mantha, Rupangarh, Khari and Khandela. Lake has 5700 square km catchment area. The lake is an extensive saline wetland, with water depth fluctuating from as few as 60 centimetres (24 in) during the dry season to about 3 meters (10 ft) at the end of the monsoon season. It occupies an area of 190 to 230 square kilometers based on the season. The lake is elliptically shaped with a length of approximately 35.5 km and a breadth varying between 3 km and 11 km. The lake straddles Nagaur and Jaipur districts and borders on the Ajmer district. The circumference of the lake is 96 km, and it is surrounded by the Aravali hills on all sides [2].

The Sambhar lake basin is divided by a 5.1 km long dam made of sandstone. After the salt water reaches a certain concentration, it is released from the west side to the east side by lifting dam gates. To the east of the dam are salt evaporation ponds where salt has been farmed for a thousand years. This eastern area is 80 square km and comprises salt reservoirs, canals and salt pans separated by narrow ridges. To the east of the dam is also a railway to the salt works [2].

‘Faruknagar’ was once an important trading centre for salt manufactured from saline water obtained from wells of 12 village estates located near the town. This salt was called ‘Sultanpur Salt’ after the location of the most important salt-works of the region. It was the centre of salt production for use in Delhi and the United Provinces until the late 19th century. Salt was produced by extracting brine from about 40 wells using bullocks and drying in open plots. Since salt was one of the major sources of government's revenue, the office of the Salt Superintendent at Sultanpur supervised the levy of Rs. 2 per maund (about 37 kg). With the levy of the heavy salt tax and acquisition of the Sambhar Salt Works by the Government, the Sultanpur salt became uneconomical and by 1903-04 the salt industry was struggling for survival and finally closed in 1923-24 [3]. 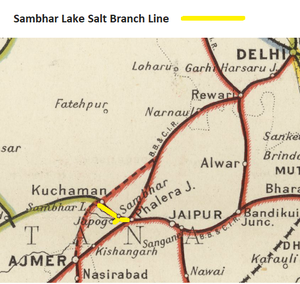 Sambhar Lake Salt Branch Line, the first section of 4½ miles(7km) opened in 1875 as a metre gauge(MG) branch from Phulera Junction on the Rajputana State Railway ‘RSR Mainline’, between Rewari and Ajmer, to the south edge of Sambhar Lake [4]
Note: Phulera Junction has incorrect spelling on 1909 map (shown as Phalera Junction) The following later extensions are recorded, bringing the total to 33 miles(53km) in 1891 [4]:-

Note. * Nawa Town - the “Imperial Gazetteer of 1909” gives the following:- ‘Nawa is a town, situated on the north side of Sambhar Lake, about 1 mile east of Kuchawan Road Station, a junction of the Rajputana-Malwa State Railway(RMSR) and the Jodhpur-Bikaner Railway(JBR). There is a large export trade in salt, the manufacture of which supports a considerable proportion of the people’ [5].