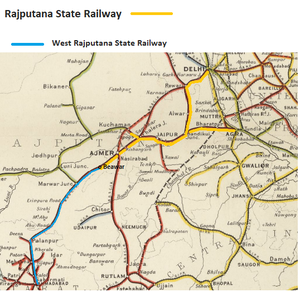 The ’Rajputana State Railway’(RSR), the first Imperial State Railway, was formed tin 1869 by the joining the proposed ‘Rajputana - Agra District Railway’ and the ‘Rajputana - Delhi District Railway’ and was placed under the control of the Government of the North-West Provinces. It was divided into two districts; the Agra District from Agra to Ajmer and the Delhi District from Delhi to a point of junction of the two districts (chosen later at Bandikui). Each District was supervised by a Superintending Engineer.

The survey of the Delhi-Rewari line began in May 1869 and the project was sanctioned by the autumn. The earth work on this line based on 5 feet 6 inch broad gauge(BG) alignment began in April 1870 and was done departmentally. In January 1871, it was determined that all new railways should be constructed as metre gauge(MG) and the estimates were revised accordingly. Major F. S. Stanton was appointed at this stage to head the Delhi Division.

In 1871 the Government resolved for the RSR to undertake the construction of metre-gauge railways in Rajputana, to facilitate the supply of salt from the Great Salt Lake at Sambhar to the North-West Provinces, and to get rid of the vexatious salt-customs barrier. Captain Stanton was selected to take charge of the construction [1]. The RSR mainline from Delhi opened to Rewari, together with the ‘Farukhnagar Salt Branch Railway’, in Feb 1873 and extended to Bandakui in Dec 1874 [2].

In 1875, the line had extended as far as Ajmer with the aim to reach Ahmadabad and to connect to the Broad Gauge (BG) of the ‘Bombay, Baroda and Central India Railway’(BB&CIR).

At Beawur the line became the ‘Western Rajputana State Railway’ (shown in blue on map and see separate page) which reached Ahmadabad, a distance from Beawur of 272 miles(438km), in 1879.

In 1879, the RSR was again authorised to build new metre gauge(MG) lines:-

An on-line search of the India Office Records (IOR) records held at the British Library relating to this railway [3] gives the following:-

The following is in approximate chronological order:-