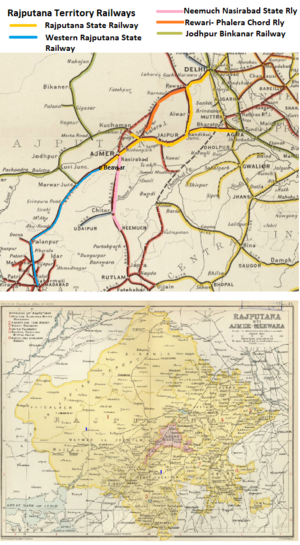 Rajputana was a territory which includes eighteen Native States and two chiefships, together with the small British Province of Ajmer-Merwara [1]. It included mainly the present-day Indian state of Rajasthan, together with some adjoining areas.
The ‘Imperial Gazetteer 1908 [2] gives the following account:-

The 'Rajputana State Railway’(RSR), the first Imperial State Railway, was formed in 1869 by the combining the proposed ‘Rajputana - Agra District Railway’ and the ‘Rajputana - Delhi District Railway’ and was placed under the control of the Government of the North-West Provinces. It was divided into two districts; the Agra District from Agra to Ajmer and the Delhi District from Delhi to a point of junction of the two districts (chosen later at Bandikui) - see separate RSR page for more details

The final surveys for the line from Rewari to [[Bandikui] was determined and sanctioned by the Government of India in 1871 and work was started by the ‘Rajputana State Railway’ as a metre gauge(MG) railway with the revised Estimate submitted in July 1871 to conform with the Government Rail Gauge Policy of Jan 1871 see separate Gauge page for more details.

At the same time the Government in Bombay put out to tender for a metre gauge railway from Agra to Ajmer and in October that year Messer’s. Glover and Co were awarded the contract to build the railway. Earthwork started near Agra and Sambhar[3]

The RSR was divided into two districts. The one, known as the ‘‘Agra District’, comprises the line which runs from Agra through Bhurtpore(Bharatpur), Jaipur and Ajmere(Ajmer) to Nasirabad. The other, known as the ‘‘Delhi District’, runs from Delhi through Rewari and Ulwar to Bandikui, where it forms a junction with the ‘Agra District’ at a point 94¾ mile from Agra. The two Districts were constructed under different Engineers-in-Chief. The construction of the Agra District was let to contractors, Messrs. Glover & Co. and while the Delhi District was constructed under Departmental management .The two were combined on 7th December 1874 [4]

Failure of the rails supplied from Belgium had held up the progress on the Agra to Ajmer line in 1872 and the first 33 miles opened for goods traffic from Agra to Bharatpur in Aug 1873 [5]. But due to heavy rains shortly afterwards the Bangunga River over flowed its banks and the Bharatpur Station was cut off [6]. The completion of the line from Ajmer to Nusseerabad was held up awaiting the decision of the Government [7]. The heavy rains of Aug 1873 showed that it was necessary to supply extra drainage and embankments raised. By Sept 1874, 17 miles of the line from Rewari to Bandikui had been laid. [8]. The lines from Agra were fully opened in sections to Bharatpur Mar 1874; Daosa (near Sawai Madhopur [Apr 1874; Jaipur Oct 1874 and Sambhar Mar 1875. From Delhi to Rewari Mar 1874;. Rewari to Alwar Sept 1874 and finally to Bandikui Junction Dec 1874.

The ‘Western Rajputana State Railway’ was surveyed 1873-75 , and completed in stages from 1878-79. The metre gauge(MG) line ran from the town of Beawur to Ahmadabad, a distance of 272 miles(438km) - see separate WRSR page for more details

In April 1875, the Engineer in Chief, Western Rajputana State Railway, Survey Dept, reported the second year of surveys were finished in March 1875, working drawings for construction had been made but alternative routes to the 1873 line were being searched for through the Sendra Pass of the Arawali Range. As a consequence, the Marwar Chord Line (Ajmer to Ahmadabad) had been modified and another crossing point of the Sookree River chosen. The Indian Government also asked for a search for an easy access through the Arawali Range to Oodeypore State. This was not found. [9]

By 1878 there was concern as to the viability of the railway and ways of cutting costs and increasing the amount of traffic. There was a large change in Management partly due to end of contracts partly due to illness. A Station was being built at Agra Fort as an interface with the broad-gauge railway. A temporary ‘Behaotee Quarry Railway’ line was built to the quarries at Behaotee 4 miles in length and was completed in November 1878 [10]

In the West the Llne from Ahmedabad to Rewari was under construction and from 1 Jan 1879 consisted of three Divisions Sendra, Godwar and Marwar, with a total length of 148 miles. The portion between Beawar and Raipur opened on 11 Aug 1879 [11]

The Neemuch Nasirabad State Railway was a Metre Gauge(MG) line and connected Neemuch to Ajmer. The construction started in 1875, and the work completed in March 1881 - see separate page for more details

The Superintending Engineer reported in Nov 1872 that the survey lines between Neemuch and Nasirabad also a branch line was surveyed between Futtehabad and Oojein. “The general line of the cart road from Neemuch as far as Rutlam, whence it diverges to Burnucrour, and, passing Futtehabad, with branch from that place to Oojein, joins the Holkar State Railway at Indore; the length of this line is 168 miles, including a branch of 13 miles” and “passes near the towns of Nimbhera, Chittor, Humeergurh, Bheelwarra, and Bhunderwarra.” [12]

The ‘Rewari- Phalera Chord ‘ was a Rajputana-Malwa State Railway(RMSR) metre gauge(MG) chord line, 133 miles, opened 1904-05 connecting Rewari and Phalera. The line was worked by the Bombay, Baroda and Central India Railway (BB&CIR) as part of its MG network. This chord shortened the distance between these towns and avoided the longer route via Alwar and Jaipur

The RMSR line from Phalera connected through Sambhar Lake to Kuchawan Road where it connected to the ‘Jodhpur-Bikaner Railway’ (JBR) thus providing the direct link between Delhi and Karachi. “They were both metre gauge but no ‘running agreement’ has been found between RMSR or BB&CIR and JBR. So it would appear there was a necessity to change trains at Kuchawan Road Station

It was first surveyed in 1897 when a party under Mr J Burn started work. His instructions were to survey a link between Kuchawan Road and Rewari passing through Sawai Madhopur. The Resident requested the help of the Nazims in supplying goods and especially when passing through Jodhpur Territory, which was the majority of the route. Unfortunately, the Hakim of Madhapur was not so inclined and caused trouble for the survey pulling out survey posts and putting claims for damaged crops and causing an affray. The survey was finally completed.

The line had the approval of the Indian Government but before It was built a famine struck in 1899 and the groundwork for the line was requested as a famine relief project. The work started from Rewari Junction through the Khawati Country towards Kuchawan Road. Three possible routes had been surveyed 2 routes were possible between Phalera and Sawai Madhopur. The third line was the straightest and lay completely in Jaipur Territory, but it left on the side the trading town Kishengash and also Bhaislana. Line B would serve both these places and is thought to be the best route although it passes through a 3-mile part of Darbar of Marwar Territory. In 1899 the line became known as the ‘Rewari- Phalera Chord‘ when the Jaipur and Jodhpur Darbars agreed to build the line. The Marwar Darbar in Jaipur agreed the session of the 3-4-mile section to the railway company and to pay of the cost of building the railway in their territory.

A proposal was made by the Marwar Darbar to link the Jodhpur-Binkanar Railway(JBR) system in Jaipur to the ‘Rewari- Phalera Chord’. This caused a disagreement until a full proposal was put forward:- “I enclose a tracing which will clearly show the idea the Darbar has in view. The proposed link from Barawar would probably run on shown on one or other of the dotted lines or somewhere between the two. It is hoped the Jaipur Darbar will now be able to say in equally distinct terms if they at acquiesce the proposal’ Unfortunately at the time the Jaipur Darbar replied “Under the above circumstances the Jaipur Darbar are not disposed to agree with this proposal” [13].

When the construction of the ‘Rewari- Phalera Chord’ started in 1900 a survey of the earthworks was made and a payment of the cost of Rs 6898 was paid for the famine work. A total of 9,820 cu feet of earthwork had been done under the scheme. The full construction completed in 1901 134.25 miles long and was to form part of the Rajputana-Marwar Railway System. The railway passes through British Territory for 16 miles, Alwar 1.1 miles, Nabha territory 10.05 miles, Patiala 14.25 Miles, and Jodhpur 3.25 miles and finally Jaipur 90.10 miles; giving a total of 134.25 Miles at a cost of over Rs 6,000,000. Through the foreign territories the construction crew, in the light of previous experiences, were protected buy Treasure Guards supplied by the local Darbars. Jodhpur was the last territory to cede jurisdiction over the land occupied by the railway in 1905. This allowed the railway to open, but owning land in a Foreign country left the Indian Government with a problem it solved this by making the railway an administrative District in its own right with all that entailed. [14]

The ‘Jodhpur-Bikaner Railway’(JBR) was constructed between 1881 and 1902 connected to the ‘Rajputana-Malwa State Railway’(RMSR) at Marwar and at Kuchawan Road. |see separate page for more details