The Western Rajputana State Railway was surveyed 1873-75 and completed in stages from 1878-79. The metre gauge(MG) line ran from the town of Beawur to Ahmadabad, a distance of 272 miles(438km). 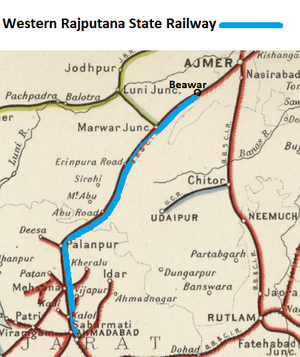 The ‘Rajputana State Railway’(RSR) had extended their metre gauge(Metre Gauge line) as far as Ajmer in 1875 with the aim to reach Ahmadabad and to connect to the Broad Gauge (BG) of the Bombay, Baroda and Central India Railway(BB&CIR). The RSR further extended their line from Ajmer as far as Beawur, 32 miles(51km) which opened in May 1878,[1].

The Western Rajputana State Railway was apparently created as a separate State Railway in order to complete the connection from Beawur to Ahmadabad.

Surveys were undertaken by the Railway Branch of the Public Works Department - Railway Branch over the years 1873-75 as the ‘Administration Report’ [2] by Mr James Collet, Engineer-in-Chief, Western Rajputana State Railway, with the following personnel mentioned as being involved in the surveys:-

The following is from the 1879 Report [4] by Mr A C Cregeen, Engineer-in-Chief, Western Rajputana State Railway, Northern Section:-

the ‘Northern Section’ consisted three divisions Sendra, Godwar and Marwar. Its total length from Beawur to Bhimana where it joins the Southern Section is 148 miles, 18 miles of this length i.e. the portion between Beawur and Raipore was opened for, Traffic on the 11th August 1879.

‘The Western Rajputana Railway, completed in 1879, passed some little distance away, with a metalled (or broken stone) running between the town and the station.’

No other information has been found

All these railways were worked by Bombay, Baroda and Central India Railway(BB&CIR), a State Railway.