The Holkar State Railway opened in 1874 as a metre gauge(MG) line from the ‘Great Indian Peninsula Railway’(GIPR) station at Khandwa running northward, reaching Indore in 1876 with the opening of the Holkar-Narmada Bridge over the River Narmada. The length of the line was 86 miles(138km). The line was financed by the Maharaja of Holkar of Indore and was owned by the Princely Indore State. The railway marked in Blue on the map.

Some records refer to this railway as the ‘Holkar Division’ (Khandwa to Indore, 86 Miles/138km) and the ‘Indore Division’ (Indore to Rutlam, 74 miles/119km plus Ujjain Branch, 12 miles/19km). These being divisions of the ‘Holkar & Sindia-Neemuch State Railways’ [1].

An objection from the ‘Great Indian Peninsula Railway’(GIPR) to the construction of this line to the metre gauge(MG) describes this line as the Khundwah and Indore Railway - see separate page for further information. The objection was that this railway should be constructed as a broad gauge (BG) line to provide an unbroken link between the GIPR and the NWR - both being BG systems. This objection was overruled by the Government of India and metre gauge lines were permitted See page ‘Gauge Question’ for further information 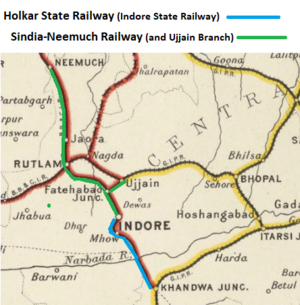 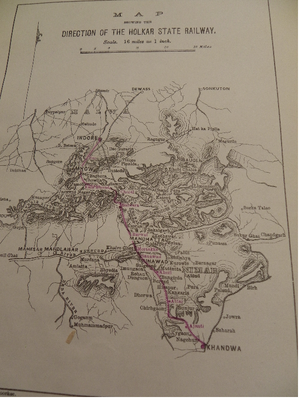 ‘Holkar State’ does not exist, it was only the name given to the railway, the correct name is ’Indore State’[2]
Khandwa is the later town spelling and as given in the ‘Imperial Gazetteer, 1908 [3]. The spelling ‘Khundwah’ is used in some of the earlier records of the 1870’s.
Narmada (Nerbudda) River – Narmada is the later name. The’ Imperial Gazetteer’ uses both [4]

The Government of India accepted payment from the Maharaja Holkar of Indore towards the construction of a railway from the Great Indian Peninsula Railway(GIPR) station at Khandwa to his capital city of Indore and in March 1870 preliminary Surveys were started .

The ‘1871-72 Report on Railways in India’ [5] names this as the “Indore or Holkar State Railway” and states:- “This line starts from Khundwah(see spelling note) , a station on the Great Indian Peninsula Railway, 352 miles from Bombay, crosses the Nerbudda River 23 miles south of Barwaie, ascends the Vindhyrange through the Choral Valley, and passes through Mhow to Indore. Its length will be about 86 miles. The works have commenced under a contract, and are being pursued vigorously. It is estimated the line will cost about £900,000. Maharajah Holkar has engaged to lend the British Government £1,000,000 at 4½% p.a. to carry out the line, he will participate in half the surplus profit over the 4½% if any, in proportion to the extent of his loan.“

The 1878 ‘Administration report on the Holkar State Railway’ [6] indicates that the route was modified with particular attention being given to the crossing of the Narmada (Nerbudda) River (see spelling note) . The result was a route from Khandwa via Sanawad to Kheri Ghat , crossing the Narmada; then ascending the Chorul Valley on to the Malwa plateau onward to Mhow and Indore. The Government was not happy with the route through the Chorul Valley. The final route was for a metre gauge(MG). There were very heavy works due to very steep gradients (upto 1 in 40) on the Vindhya Ghats. It also involved digging of 4 tunnels, deep cuttings and heavy retaining walls. The River Narmada was crossed by a bridge of 14 spans, 197 feet each and piers 80 feet above low water level see separate page for details of this bridge . There were 14 other large bridges with high piers, the highest pier being 152 feet above the bottom of the ravine.

All these railways were worked by the Bombay, Baroda and Central India Railway(BB&CIR).

In 1900 the RMSR was merged into the Bombay, Baroda and Central India Railway(BB&CIR), becoming the latter's Metre Gauge(MG) section; known as ‘Ratlam Division’ of BB&CIR. Later being designated as part of the ‘BB&CIR Malwa Section Main Line’ [7].

The following have been identified from various sources:-

The 1878-79 Record, para 7, for the Engineering Department states “ Mr. H. Dangerfield, Superintendent of Way and Works, is Officiating as Manager of the line during the absence of Captain W. S. S. Bisset, R. E., on field service, and Mr. W. C. L. Floyd, Executive Engineer, 4th Grade, is appointed to the charge of the Holkar Division, Holkar State Railway, and Mr. R. E. Wright, Executive Engineer, 4th Grade, to the charge of the Indore Division, Neemuch State Railway, Mr. Ker, Assistant Engineer, having been transferred to another line and Mr. Landon having gone on furlough”. Para 43 Traffic Department, states “Mr. W. E. Hartt has been in charge of this department, and Mr. C. E. Vining, an additional Assistant Traffic Superintendent, was appointed to the line in March 1879” [1]

An on-line search of the India Office Records (IOR) records held at the British Library relating to this railway [12] gives the following:-