Trichinopoly was the headquarters of Trichinopoly District in Madras during the British period. It is now the fourth largest city in Tamil Nadu.

Modern name: Tiruchirapalli or Tiruchirappalli or 'Trichy' or "Tiruchy' or 'Tiruchi'
Variants:Trichinopoly

Trichinopoly was the headquaters of the Great Southern of India Railway estabished in 1865; which in 1874 was amgamated into the South Indian Railway(SIR). In 1878 the SIR HQ was transferred to Tricinopoly from Negapatam.

For links to cemetery inscriptions see "FIBIS Resources" and "External Links " below. 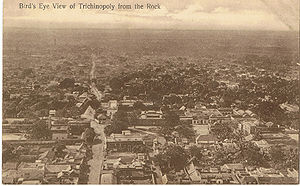 Bird's Eye View of Trichinopoly from the Rock