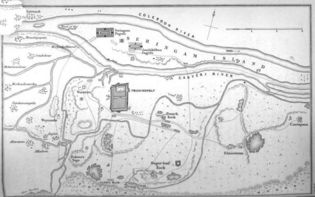 This was an event during the 2nd Carnatic War

Siege begins
The Mysoreans occupying Srirangam had professed friendship with the Nawab of Arcot and the British while intriguing with Dupleix at Pondicherry. Realising the situation Captain Dalton attempted to drive them and the Mahrattas out of Srirangam on 3 January 1753 but was repulsed with considerable loss. Dalton found himself besieged and with only three weeks supplies. An appeal to Fort St David brought Stringer Lawrence and reinforcements which arrived on 17 May.

Attempt on Seringham
Lawrence made another attempt to clear the enemy out of Srirangam on 21 May but had to retire to Fukeer's Tope 4 miles south of the town (see 1753 map). Astruc managed to occupy raised ground called Five Rocks which allowed him to control the area around the town.

Battle of Golden Rock
On 7 July Astruc took possession of another eminence called Golden Rock but was driven off by Lawrence's grenadiers.

Battle of Sugarloaf Rock
Lawrence left in search of supplies returning on 18 August not only with a convoy but with 5,000 troops from Tanjore and 170 Europeans & 300 sepoys from Fort St David. M. Brennier, who had replaced M. Astruc, deployed his forces between Golden Rock and Sugarloaf Rock to prevent access to the town. In the action that followed the French and their allies were defeated and retreated to Weyconda from where they were driven out on 4 September moving Mootchellinoor across the Cauveri River from Seringham. M. Ansruc then returned with 400 Europeans, 2,000 sepoys and six guns with 3,000 Mahratta cavalry and took command once more. The French were then able to retake the Five Rocks, and the Golden and Sugarloaf Rocks, and resumed intercepting supplies.

Battle of 2 October
Lawrence moved to Elmiseram where he received reinforcements of 237 Europeans and 300 sepoys on 27 September. On 2 October at the head of 600 Europeans and 2,000 sepoys he attacked and took Golden Rock and then routed the Mysoreans and French on the plain. Astruc was taken prisoner and 200 of the enemy killed or wounded. The English lost 40 men. The French retreated to Seringham and the blockade of Trichinopoly was once again broken.

Dalton's Battery
Dupleix sent further reinforcements to Seringham. 300 Europeans and 1,200 sepoys under M. de Mainville arrived on 21 November. At 3am on 9 December an assault party with ladders surprised the sepoy guards at Dalton's Battery intending to blow in the gate. They gave themselves away by firing two captured guns and were then caught in the narrow passage leading to the gate. Pinned down, they eventually had to surrender. Out of 600 in the attacking force, 41 were killed and 364 taken prisoner.

Ambush at Coutpara
Once again Dupleix sent reinforcements and de Mainville determined to intercept an incoming supply convoy. With an escort of 180 Europeans and 800 sepoys with four guns, the supply train set out from Killahcottah about 12 miles from Trichinopoly. De Mainville dispatched 12,000 Mahratta horse to spring an ambush once his 400 French and 6,000 sepoys had made a frontal attack. On 26 February 1754 the plan succeeded and 50 of the escort were killed and 138 taken prisoner. Following this the French re-established their forces around Trichinopoly.

Conclusion
The siege was brought to an end when Dupleix was recalled to France and Charles Godeheu became governor of the French East India Company in August 1754. He negotiated a truce with Thomas Saunders the resident at Madras which resulted in the Treaty of Pondicherry bringing the 2nd Carnatic War to a close.

History of the French in India: from the founding of Pondichery in 1674 to the capture of that palce in 1761 by Major G B Malleson 1868
Events in the second siege
Attempt on Seringham
Battle of Golden Rock
Battle of Sugarloaf Rock
Battle on 2 October
Assualt on Dalton's Battery
Success at Coutpara