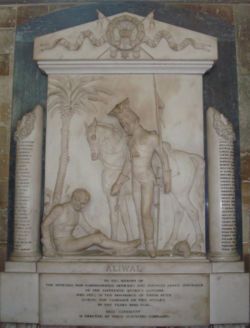 Due to the return of the 16th Lancers to England, on 1 November 1875 2 privates transferred to the 13th Hussars[1]

The regiment fought in the Battle of Aliwal on the 28th January 1846, suffering many casualties. Names of the fallen listed on the Aliwal memorial pictured can also be found on Stephen Lewis' memorials website (list of other ranks and list of Officers). Names of those who died are also available on the website Kent Fallen: html version, pdf

A description of the 16th's experience at Aliwal can be found in the battle article.

John Arnfield transferred from the 3rd Regiment of Foot, the Buffs 1 April 1840, age 20 possibly because his sister had married a sergeant in the 16th Lancers at Meerut in 1838. He served in the Gwalior Campaign and the 1st Sikh War He remained with the regiment in India until it returned to England, when he transferred to the 9th Lancers 1 April 1846

Three Cheers for the Queen-Lancers Charge! by W. J. Gould. (The Experiences of a Sergeant of 16th Queen’s Lancers in Afghanistan, the Gwalior War, the First Sikh War and the Kaffir War) available as a current reprint by Leonaur. Also available online under the original title, see below.