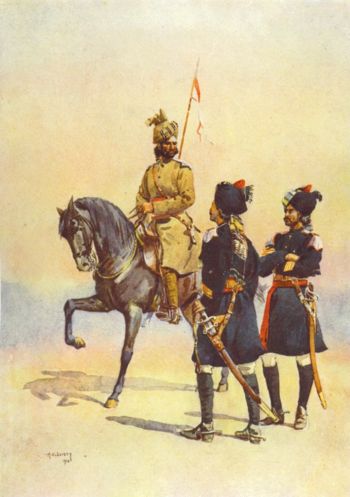 Prince of Wales’s Own, The Scinde Horse 1839-1922 by Colonel E. B. Maunsell, first published 1926. Also available in a reprint edition,[1] which in turn is available online on fold3, a pay website, refer below.

The 36th Jacob's Horse went to France in 1914 with the Indian Corps and fought dismounted at Festubert (January 1915), at Ypres, and on the Somme (1916). Its greatest battle was Cambrai (1917) when it repeatedly counter-attacked the advancing enemy. In 1918, the 36th moved to Palestine. It fought in Allenby's great final cavalry operations (the actions at Sharan Megiddo, Abu Naj, and the advance to Damascus). The Turks defeated, the Regiment was kept in Syria as a garrison force until 1921 and then returned to India for the amalgamation.[1]