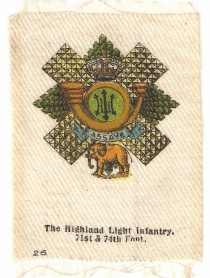 Crest of the Highland Light Infantry

A regular regimental journal can be a valuable source of information. The Highland Light Infantry Chronicle was published quarterly, from Volume 1, no. 1 January 1893 to Volume 54, no. 3, December 1958. Some editions are available online, see below. The British Library has this publication in its catalogue. Another source may be the National Army Museum, or the Regimental Museum.

The Highland Light Infantry (the 71st H.L.I. and 74th Highlanders) by L B Oatts 1969. Archive.org Books to Borrow/Lending Library. A book in the series Famous Regiments. (113 pages)