The bridge over the Meghna River, popularly known as the Bhairab railway bridge, was opened on 6 December 1937 [1]. 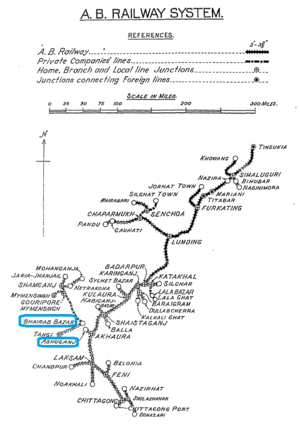 The ‘Assam-Bengal Railway’ (ABR) Mainline from the coast at Chittagong was extended inland to reach Tinsukia. The line had reached Akhaura, 122 miles(196km) from Chittagong in 1896 [2].

The ‘Tangi Branch Railway’ from Akhaura on the ABR Mainline connected through to Tangi, 61 miles(98km), to meet with the Eastern Bengal Railway near Dacca. The branch line of 19 miles(30km) opened in 1910 to Ashugan, a village on the left bank of the Magna River [2]. When first opened the line was known as the ‘Bhairab Bazar Branch Railway’ and enabling a crossing of the river by boat to the Bhairab Bazar village on the opposite bank.

In 1915 a short extension of 0.8 miles(1.3km) connected to the ‘Bhairab Wagon Ferry’ and from Bhairab Bazar the ‘Tangi Branch Railway’ connected through to Tangi in 1916[2].

The locations of Ashugan and Bhairab Bazar are marked in blue on the map.

The ‘Bhairab Wagon Ferry’ operated until the opening of the ‘Meghna Bridge’ in 1937 .

Construction of the ‘Meghna Bridge’ commenced in 1935 and involved caisson sinking in depths of water up to 65 feet(20 Mtr). The supply of girders from Indian sources was punctual and satisfactory and the bridge with its approaches and new stations at Ashunganj and Bhairab were completed in time for the opening in December 1937 [3]