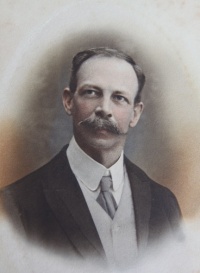 Clifton & Co Photography Studio of Bombay, and noted publisher of postcards was established by the proprietor Harry Clifton Soundy in 1896 or 1897.

Harry was the second born but oldest surviving child of Bombay businessman Arthur Francis Soundy and his first wife Catherine Elizabeth Palmer. His parents had been born and married in London on 30 October 1859; but Harry was born in Bombay on 18 September 1863 and baptised 14 January 1864 at Colaba (Bombay)[1] . Nothing is known of Harry’s early life, though the 1871 English census records him as a 7 year old with his mother at Ann Fisher’s boarding establishment at 1 Maida Vale, Paddington. [2]

In the years from 1889 to 1894 he was working as a Manager of Bourne & Shepherd’s Bombay studios at 19 Esplanade Road and can be found listed as such in various commercial directories.[3] Probably in 1895 he left Bourne’s to set up in partnership with Charles Schulz, an older man who was also an employee of Bourne and Shepherd [4] The British Library India Office Select Materials includes photographs by Schulz & Clifton from this time period. [5] 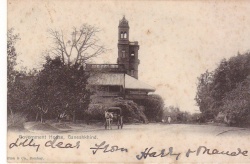 However, this partnership did not last long and by 1897, Harry Clifton Soundy was trading on his own account as Clifton & Co, from a studio in Meadows Street, Bombay. The studio was the venue for daily screenings of silent films from 1897 [6]. (This opportunity probably arose from his father, A.F. Soundy’s involvement in the showing of the French Lumiere Brothers’ Cinematography in July – September 1896, by Marius Sestier. )[7]

The early years of the Clifton & Co business are partly documented through brief advertisements and news item references in The Times of India. Some examples are: - Bombay Volunteer Rifles Cycling Club: 3rd prize, value Rs20 presented for the “Ladies’ Half Mile Handicap”(T of I, Jan 6, 1899) - Photographs of the Presidency Cricket Match at Rs1 each (T of I 14 Aug 1899) - Indian Christmas Cards: Hunting, Yachting, Cycling, Running, Views and Native Characters from one to 8As each (T of I 30 Nov 1899) Showing signs of expansion, on 23 January 1900 he advertises to buy a new or second-hand collotype printing press.

The Postcards for which Clifton & Co are possibly best known are the subject of an advertisement in 1901: Pictorial Indian Post Cards: 24 new subjects now ready. Indian views size 10 by 8, Rs5 per dozen. Clifton & Co, Photographers. (T of I, 12 Oct 1901). The India Office Select Materials has an extensive collection of postcards from the studio, all catalogued under the name Clifton & Co, the proprietor is never identified as Soundy. 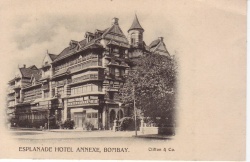 Harry Clifton Soundy married on 4 July 1907 at Mussoorie to Daisy Holloway. The couple only had one child, Phyllis Marjorie Soundy, born 31 August 1908. The family lived in a lovely residence at 17 Harkness Road, Malabar Hill.

There is no evidence that Harry left a will.

At some time the business moved to the Albert Building in Hornby Road, and following Harry’s death, his widow, Daisy, is recorded as Proprieteress of the business up until 1933.

Harry Soundy was also a skilled watercolorist, with examples of his painting being found in private autograph books, and framed works in the possession of his descendants who live in Melbourne, Victoria, Australia.