The Daurala Light Railway was a 2ft/610mm narrow gauge(NG) railway.

Note some records give the incorrect spelling ‘Darurala Light Railway’ 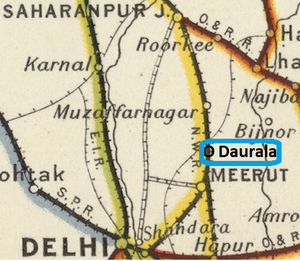 The route of the light railway had not been determined. Daurala is a small town in the Upper Provinces, not listed in the ‘Imperial Gazetteer of India’. It has a railway station on the broad gauge(BG) ‘North-Western State Railway ’(NWR) between Meerut and Muzaffarnagar, the NWR ‘Ghaziabad to Lahore Mainline’.

It would appear from the accounts below that the railway was associated with the ‘Daurala Sugar Factory’, which was established in 1932 [1].

Various records exist showing that 2ft/610mm(NG) locomotives were in use at Daurala.