Decauville et Compagnie (see separate page), was a manufacturing company founded by Paul Decauville (1846–1922), a French pioneer in industrial railways. Decauville's major innovation was the use of ready-made sections of light, narrow gauge track fastened to steel sleepers; this track was portable and could be disassembled and transported very easily [1]

Decauville Portable Railway System, starting from 1875 the company produced track elements, locomotives and wagons. These were exported to many countries [1].

The 'Scientific American', 15 Aug 1885, printed an article that originally appeared in the French magazine, 'L'Ilustration' [2], which states:-

"The English army has succeeded in establishing a portable railway on several points of the Bolan Pass. This railroad is of the Decauville system, formed in sections of small steel rails, which can be put down or taken up very quickly. This ingenious railway - which has been used considerably for work on the Panama Canal and for the transportation of sugar cane in Australia and Java - has become the indispensable means of transport in all wars. It is at present being used in Tonquin and Madagascar by the French army, and is also being used on the Red Sea by the Italian army. When the Russian government commenced the war in Turkestan, in 1882, it bought one hundred versts, or about 66 miles, of the Decauville railroad, which Gen. Skobeleff used with great success for the transportation of potable water and for all the provisions for his army. This railroad was taken up as the army marched forward, and when the Russians advanced recently, in Afghanistan, the little railway appeared at the advance posts, and was described to the English army by the officers who watched the operations for the Afghans. An order for a similar apparatus was given by the English government to M. Decauville, directions being given that the road should be of the same type as that furnished to the Russians. The object of this was, probably, that any sections of road which might be captured from the Russians during the war could be used by the English. In this last order there was one problem which was very difficult to solve; all the material had to be carried by elephants, and they wanted a locomotive. M. Decauville had the locomotive made in two parts, the larger of which weighed on 3,978 pounds(1404kg) , the greatest weight that an elephant can carry."

Important Uses of the Decauville System 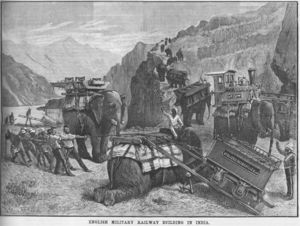 Orders for a feasibility survey for the Bolan Pass Railway were first issued by the British Government in 1876 [3].

The Quetta Link Railway had reached Sibi on 2 May 1880 [4].Work on the construction of railways through the Pass started in 1880 but was soon stopped after laying of 31km track due to the occurrence of the famous Battle of Maiwand in the area.

Work restarted shortly after using the Decauville Portable Railway System by rapidly laying a rail track in the bed of the river Bolan and finally a steam locomotive rolled into Quetta in August of 1886. The 1885 account given in Practical Machinist [5] states "This railroad is of the 'Decauville System', formed in sections of small steel rails, which can be put down or taken up very quickly.... the locomotive made in two parts, the larger of which weighed on 3,978 pounds, the greatest weight that an elephant can carry”[5].

Changa Manga Forest Tramway - see separate page for more information
This is reported as using the 'Decauville Portable Tramway System' with a gauge of 16-inch(406mm). The gauge appears to be special and not adopted elsewhere as all other examples of the Decauville System are based on the 60-cm(600mm)(Rail Gauge)