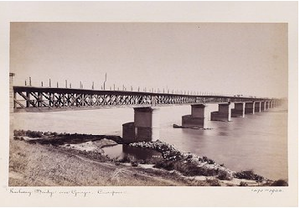 ‘Ganges Railway Bridge, Cawnpore’ opened 15 Jul 1875 [1] by the ‘Oudh and Rohilkhand Railway’ (O&RR) and constructed as a combined road/rail bridge crossing the River Ganges to bring the O&RR line from Lucknow into Cawnpore Town to connect to the ‘East Indian Railway Howrah-Delhi EIR Main Line’

The 42 miles(68km) line from Lucknow to the left bank of the Ganges River near Cawnpore opened in 1867. The line had been constructed by the ‘Indian Branch Railway’ which become the O&RR in 1872.

Prior to this date the River Ganges was crossed at Jajmau near Cawnpore by using the ‘Bridge of Boats’ and a Ferry to carry passengers and goods across the river to Cawnpore Town. This continued until the opening of the bridge in 1875.

The structure consisted of twenty-five spans of 100 ft each(30.5mtr) and two land spans of 41 ft each(12.8mtr). The roadway is 9 ft wide(2.7mtr)and carried on the bottom flange of the main open box girders, the top carrying a single line of railway. The construction was very unusual and was undertaken from the Cawnpore end only as there were no facilities on the further bank. The method of construction is fully described in an 1872 article [2] .