Howrah Tramways (Light Railways)
The tramways of Howrah operated by Martins and Co are interlinked:- 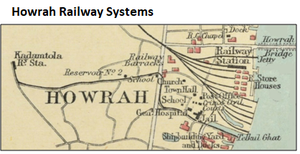 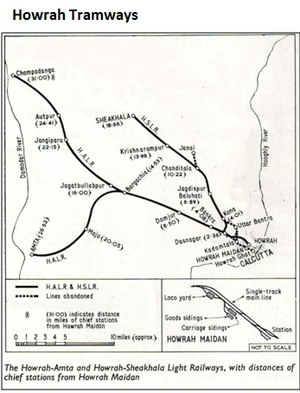 On 12 June 1889 an agreement was signed between the District Board of Howrah and Messrs. Walsh, Lovett & Company trading as T A Martin & Company on behalf of the Bengal District Road Tramways Company; this gave the Company the right to construct and work a tramway over a portion of the roads. This was subsequently renewed with Martin's Light Railways Co Ltd and sanctioned by Government notification in the Calcutta Gazette of 27 March 1895. On the 2 May 1895 the ‘Howrah-Amta Light Railway Company was formed and to be worked by Martin's Light Railways.

The initial line was built from Telkul Ghat to Kadamtala and would be a joint running line for both railways. From here the lines diverged one to Amta in the south west and a shorter line to Sheakhala in the north west. The lines were built simultaneously.

The Howrah-Amta line(HALR) was opened up to Domjur in 1897, and to Amta in 1898. An extension from Bargachhia (Bargechhe) junction to Autpur was opened in 1904, and a further extension to Champadanga in 1908, giving a total line length of 44 miles (70km) 2ft/610mm narrow gauge(NG) line. An extension towards Rajbalhat from Amta was sanctioned but never built.
Starting from Telkul Ghat on the Hooghly river, and skirting the Court Maidan it passes through the crowded Panchanantala road to Kadamtala station a distance of 2 miles (3.5km). The lines proved popular, however working the frequent trains through the busy streets with a runner with a bell to warn of an approaching train became a major concern. In 1939 the Municipality refused to renew the licence over this section and the lines terminated at Kadamtala Station. Finally in 1948 a new terminus at Howrah Maidan was opened with the lines on a new alignment.
From Kadamtala the HALR runs west, chiefly along the side of the Jagatballabhpur road, and then goes south-west to Amta.

The Howrah-Sheakhalla Light Railway of the same gauge, running on the HALR line to Kadamtala and then north-west along the Benares road to the border of the district, and thence to Sheakhala in Hooghly district.

The Howrah Municipality Conservancy Tramway operated on the same gauge. The Sleakhalla line followed the same routing within the Municipality and it is thought the company incorporated the line and used it during the day while the movement of night soil took place at night. The conservancy line ran up the Belgachia Road to a trenching ground that was 1 mile (1.6km) from the Sheakhalla line.