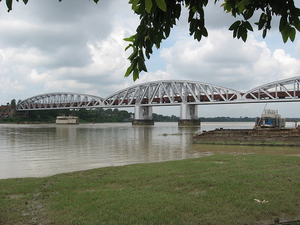 The Jubilee Bridge , known originally as the Hooghly River Bridge,is an important rail bridge over Hooghly River between Naihati and Hooghly. The bridge was constructed by the East Indian Railway(EIR) and connected to the East Bengal Railway(EBR) enabling freight traffic from upper India to run to the Port of Calcutta, with a charge being paid to EBR for the use of their tracks. [1]

The Bridge was designed by Alexander Meadows Rendel, Consultant Engineer to EIR and Bradford Leslie, the EIR Chief Engineer. The Jubilee Bridge is considered to be the climax of both their bridge-building careers allowing trains to cross the Hooghly River to Calcutta. The construction started in 1882 and was completed in 1887. The Chief Engineer in charge of construction works was Lt Col Arthur John Barry. The Jubilee Bridge was opened on 16 February 1887 in the fiftieth or jubilee year of the reign of Queen Victoria. [2]

The Jubilee Bridge is noteworthy in that it is a cantilever truss bridge, constructed entirely by riveting, without any nuts or bolts used in the construction [2].

The selection of the site of the bridge , design and construction is fully described in an 1888 article in ‘The Proceedings of the Institution of Civil Engineers’ [3]. The bridge was designed for a broad gauge (BG) double tracked railway , the central section 360 ft(110mtr) and the two side-spans are each 420 feet(128mtr) giving a total bridge length of 1200 feet(366mtr) between the side abutments

An on-line search of the India Office Records (IOR) records held at the British Library relating to this railway [4] gives the following:-

It also gives the following:-

Personnel involved with design and construction 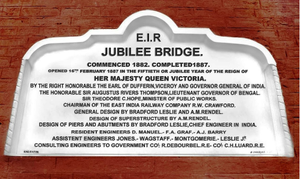 The plaque made on the occasion of the opening of the Jubilee Bridge is illustrated in “Symphony of Progress" page 22 [5]. It bears the following references:-

The Jubilee Bridge was decommissioned from service on 17 April 2016, and the rail traffic was diverted through Sampreeti Bridge constructed beside the Jubilee Bridge. Jubilee bridge served the people for 129 years, and several generations used the service to cross the River Hooghly. The bridge has the distinction of being first permanent crossing over the Hooghly, which had been considered unbridgeable owing to difficult foundation conditions at that time [2]