The Khushal Garh Bridge is situated between Khushalgarh and Kohat crossing the Indus river. The broad gauge(BG) bridge was completed in 1907 as part of the Khushalgarh-Kohat-Thal Railway. Prior to this date the BG line terminated at Khushalgarh and a narrow gauge(NG) line continued from the right bank of the Indus via Kohat to Thal, this line was converted to BG. 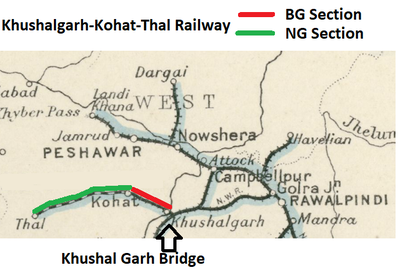 It is reported to have been constructed by a Mr Robertson (unable to verify). It is the shortest bridge over Indus river. [3]

On this bridge the train track and vehicles road for vehicles are constructed together. The upper side is used for trains and lower one for general traffic. [4]