The Khushalgarh-Kohat-Thal Railway was a military railway which ran close to the border with Afghanistan linking Khushalgarh to Kohat to Thal.

Khushalgarh had been connected in 1881 by a short 7 miles(11km) BG spur line to Jand on the North Western Railway BG mainline [1]. 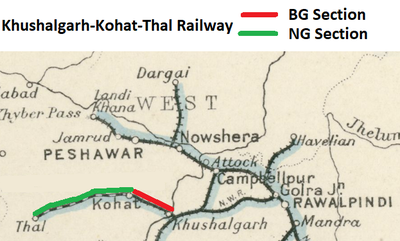 This section was first surveyed as a BG line in April 1899. A decision was made in March 1901 that no bridge would be built over the Indus river at Khushalgarh and that instead a ropeway would be built over the river. As a consequence it was decided that a BG line would not be built and a 2ft 6in/762mm narrow gauge(NG) would be constructed from the right bank of the Indus facing Khushalgarh to Kohat, a distance of about 30 miles(48km) and opened in May 1902 [1]. This section was converted to BG and re-opened in 1908 (see below).

In March 1902 haulage experiments were carried out on the unopened part of the NG line with a section of 'John Fowler' portable tramway using a passenger carriage and two wagons hauled by both a mule and a pair of bullocks [3]. The purpose and outcome of these experiments is not known.

In 1903 an accident closed the ropeway over the Indus River and a boat bridge replaced it. Eventually the decision was made to construct the Khushal Garh Bridge crossing the Indus river and at the same time to convert entire line to Thal from NG to broad gauge(BG).

The BG line was opened in 1908 thus connecting from Jand on the NWR mainine through to Kohat as the ‘NWR Frontier Kohat Section’ , 39 miles(63km) [1] and the ‘Kohat-Thal Section’, 62 miles(100km) remaining as a NG section to Thal, the entire line was merged into the NWR System[2] .

An on-line search of the India Office Records (IOR) records held at the British Library relating to this railway [4] gives several entries, the most relevant as follows: - gives the following:-