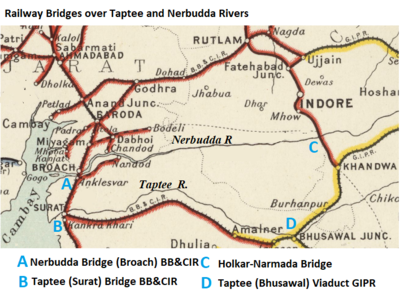 Marked in the Blue A on the map

The majority of references in historical documents use the spelling Nerbudda – this is the form adopted by Fibis.

Note
There are five different railway bridges over the Nerbudda River, we have listed these on a separate page Nerbudda River Railway Bridges
In order to provide clarity Fibis have use the adjacent (Town) and the Railway Company in each Bridge description.

The Nerbudda Bridge near Broach was constructed to carry the ‘Bombay, Baroda and Central India Railway’ (BB&CIR) and a key part of the ’Bombay-Ahmadabad BB&CIR Main Line.

The BB&CIR main line, which included the ‘Nerbudda Bridge’ opened in June 1860[3].

The completion of the ‘Nerbudda (Broach) Bridge’ and the ‘Taptee (Surat) Bridge’ enabled the BB&CIR Main Line from Ahmadabad to reach Navsari in Sept 1861, Bombay Grant Road in 1864 and Bombay Backbay(Colaba) in 1870.

Twenty-five spans of the bridge over the Nerbudda were swept away on 6 Sept 1876, and three servants of the Company were drowned. The rainfall at Surat, close by, was 17 inches in 16½ hours. The engineering staff of the Company immediately set to work to restore communication, and they succeeded in doing so on the 30 October by a diversion on a low level. They also applied themselves to repair the broken spans, and so well were their plans organized, that the bridge was finished and opened for traffic on 28 April 1877. It was reported that the bridge stability cannot be depended upon, and the repeated interruptions to traffic, which means loss of revenue on the grounds of safety and economy a more perfect means of crossing the river was required. [4].

A new bridge was specified, altogether upon different principles. Instead of being supported by screw piles, and having 67 spans of 621 feet, the bridge about to be constructed will have only 25 spans, and the superstructure, which will consist of iron girders, 187 feet 6 inches in length, will be supported by piers formed of two iron cylinders, placed 37 feet 6 inches apart, centre to centre, 14 feet in diameter, for a height of 33 feet from the bottom, and 10 feet above that. It has been designed by Sir John Hawkshaw, and a contract has been made with Messrs. Hopkins, Gilkes, & Co. for the provision and delivery in India of all the ironwork, for a sum of 148,930/. Other materials will come to about 30,000/., and it is estimated by the Agent and Chief Engineer that the cost of erection will amount to more [4].

The bridge was designed by Sir John Hawkshaw, and its erection has been carried out by Mr. H. B. Hargrave, under the general superintendence of Mr. Mathew, BB&CIR Agent and Chief Engineer [6].

Mr. Mathew, reported that to ensure permanent stability, the piers are being put down to a minimum depth of 40 feet in hard material, which has involved sinking the 14 feet diameter cylinders 85 feet below the river bed, or 100 feet below the tide level. To accomplish this, up to 800 tons of top weighting have had to be applied. The material of river bed includes several feet in thickness of hard conglomerate, a material through which it is believed that no bridge piers heretofore constructed have been sunk to so great a depth.The material of which the bridge consists was supplied by Messrs. Hopkins, Gilkes & Co. [7].

Henry James Bennett Hargrave from 1878 to 1881 was Engineer on the building of the Nerbudda Bridge [9].

The old bridge over the Nerbudda River on the BB&CIR main line near Broach was a single line bridge and the girders were too weak for modern day loads and speeds. As this was a severe handicap to the movement of traffic, the construction of a new double line girder bridge up to modern standards on a new alignment 2.43 miles(3.9km) long commenced in 1932. The bridge was completed in 1935 at a cost of Rs. 76 lakhs and opened to traffic on 20 Dec 1935 [10].

The bridge was constructed by M/s Braithwaite & Co. (India) Ltd, in association with The Hindustan Construction Company Ltd who built the piers. Construction work began in 1933. The bridge was completed in 1935 and inaugurated on 20 December 1935 by Lord Brabourne Governor of Bombay. This bridge is 1.406 km long. This bridge has 17 spans. In these spans one span is 18.28 m, another one is 76.20 m and the remaining 15 spans are 87.48 m each. The girders of the bridge were built of mild steel. The bridge damage in July, 1970 due to an earthquake [11].