Early Life and World War I
Reggie was the youngest of three surviving sons of a Kentish farming family. The story of this family is described in "On Kentish Chalk - A Farming Family of the North Downs" by David Gore 2006. His grandfather had emigrated to the Australian goldfields in the 1850s where he made his fortune. This allowed Reggie’s father to go off and train as a doctor back in England where Reggie and his brothers were born and educated. Reggie, aged 19, was visiting his relations in Queensland in 1914 when ‘the Great War’ broke out and he enlisted there in the 9th Infantry, Australian Imperial Force. A month later he heard that his eldest brother Sydney had been killed in France, and six months later he was himself fighting against the Turks at ANZAC Cove, Gallipoli. He was commissioned the following year and transferred to 49th Infantry AIF with whom he was in the trenches on the Western Front in France both in 1916 and 1917.

On the conclusion of the war, Reggie transferred to the Indian Army in which his other brother had been serving. He joined the 1st Battalion, 88th Carnatic Infantry with which he went to Iraq during the British Mesopotamian mandate 1920-22 where his battalion was brought in to quell a combined Shia and Sunni inspired insurrection (shades of Iraq in 2003). There followed a period on operations in Waziristan with 2nd Battalion, 90th Punjabis, after which in 1922 he became adjutant when the 90th was renamed 2nd Battalion, 8th Punjab Regiment and moved to Bannu.

In 1931 Reggie was seconded to the Burma Military Police in Rangoon where he helped in the quelling of the rebellions at Tharrawaddy and Prome. He was then sent north to the Shan States based at Loimwe where he had to deal with banditry, mostly from across the Chinese border. He was awarded the King’s Police Medal for three operations which he led against armed bandits in 1934. Read the citation.

Operations in Waziristan
Major Gore rejoined his battalion (2/8th) as a company commander in time for its operations in Waziristan 1936-37. The most detailed account of this campaign is to be found in Official history of operations on the N.W. frontier of India, 1936-37 ISBN 1 84342 765 6. The photographs below were taken by him on campaign. Click on an image to enlarge it.

Officers on Campaign
"Taken at Biche Kashkai during the present ops. Nothing but what we stood up in - not even a cake of soap!
15 days out like this, fighting every day and often during the night." 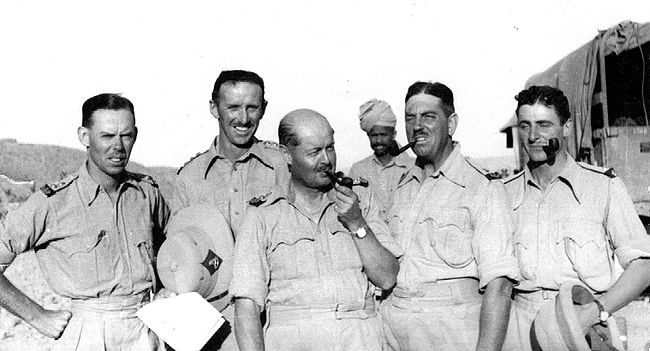 World War II After an attachment to the 10/8th, Gore was promoted Lt Col on the outbreak of World War II. He took part with 14th Indian Division in the first counter offensive into Burma southward from Cox’s Bazaar along the Mayu peninsula in the Arakan. It was an ill-fated operation mounted in December 1942 against well-prepared Japanese positions on the most difficult terrain. The Arakan has steep jungle-covered hills rising to 1500 feet, two major rivers, an almost impassable mountain barrier on the eastern side, an unhealthy climate and monsoon rains which make manoeuvring impossible for six months of the year. It was in February after two months fighting, severe losses and failure to break through at Donbaik that Reggie himself was evacuated suffering from amoebic hepatitis.

He was passed fit again in August 1943 when he became CO of the 16th Battalion taking part in the final phase of the Burma campaign as part of the 109th Indian Infantry brigade. By June 1945 the battalion was back at Chhindwara in India and Reggie was posted to the 8th Punjab regimental centre to prepare for the Indian and Pakistani military partition of 1947, after which he retired. The 8th Punjab Regiment was transferred into the Pakistan army where it is now part of its Baloch Regiment.