The Tirhoot State Railway (TSR) was one of the first metre gauge(MG) railways promoted by the Government of India(GoI). 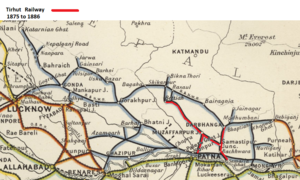 Originally named the ‘Tirhut Railway’ it was a temporary famine relief line between Dalsing Sarai (midway between Samastra and Bachwara shown on map) northwards to Samastipur to Darbhanga, 38 miles(61km), opened Nov 1875.

The line was owned by the Provincial Government and some early records refer to the ‘Darbhanga State Railway’ and later as the ‘Nirmali Branch Railway’.

The following is generally based on the 1918 ‘Administration Report for Railways’ [1] and gives a total line length of opened lines of 209 miles(336km) in 1886. 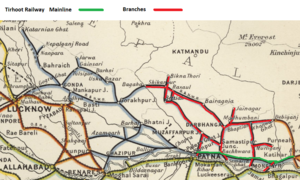 Ownership is believed to have been later transferred to the Government of India(GoI)., date not determined. The railway was worked by the GoI as part of the Indian State Railways from opening to late 1886. The records show the spelling changed to ‘Tirhoot Railway’ from then onwards.

The ‘Gunduck Bridge’ was constructed by the ‘Tirhoot State Railway’ completing the connection with the ‘Bengal and North-Western Railway’. The bridge was opened in 1887 and consisted of 8 spans of 250 feet(76mtr) with a half mile(800mtr) viaduct on one bank of the river. Horace Bell was the Engineer-in-Chief and R.A.Way was the Executive Engineer in charge of construction.

‘Tirhoot State Railway’ (TSR) operated the line from late 1886 to 30th June 1890.
TSR was then worked in conjunction with Bengal and North-Western Railway (B&NWR) from 1st July 1890.
The 1908 Map [2] shows on the TSR as a part of the B&NWR network.
The 1918 Administration Report for Railways [3] shows that the TSR, although included under the B&NWR was submitting separate Statistics of Working’ .

An on-line search of the IOR records relating to this railway [4] gives the following: -

There are no Staff Records for the TSR in the IOR.

The underlisted have been identifiede from varios other sources -