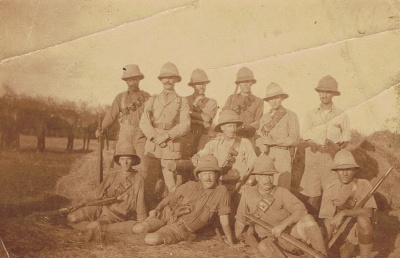 Hubert SC Waters, civil engineer c 1918, with a group of British sappers & miners who were building the Nushki Extension Railway to Zahidan in Persia

This railway route is included as one of the one hundred great railway routes around the world, in the book Illustrated Book of Steam and Rail by Colin Garratt.

The Trans Baluchistan, Quetta-Zahidan Railway was constructed as part of a strategic military route between India and Persia (now Iran).

The railway construction west of Nushki towards Iran was named the Nushki Extension Railway. Work started on it in September 1916 under the charge of Mr. P.C. Young as Engineer-in-Chief.

The extension of the Quetta-Nushki Railway was described in July 1916 as the Quetta-Seistan Railway by the Commander-in-Chief in India , Sir Beauchamp Duff - “to extend the Quetta–Nushki railway to Seistan, on the grounds that it is a 'cogent military necessity'” [2].

In 1917 this extension railway is also described by the Mesopotamia Administration Committee as the “proposed extension of Quetta-Nushki-Dalbandin railway [3].

The railway line reached the Iranian town of Duzdap (now Zahidan ) [5] on October 1, 1922 and described as the Quetta-Zahidan Railway. The railway is also described as the “Persian Baluchistan (including the Sarhad and Persian Mekran) The Quetta-Nushki extension railway” [6].

By the time the railway line reached Duzdap, the British had already demobilized their forces in East Persia. This demobilization happened in March 1921 and it took away the importance of the newly built railway. So much so that in 1931, the 221 km section between Nok-Kundi and Duzdap (Zahidan) was closed down and track removed to be used elsewhere.

World War 2 however, renewed interest in Quetta-Zahidan link. British forces wanted to aid Russian forces against Germany in Persia (Iran). The aid never materialized but the Quetta-Zahidan link was reopened on 20 April 1940 in Zahidan.

There are only 14 Railway Stations in the last 553 km section of the track. The total length of track from Quetta to Zahidan is 732 km with the last 100 km section being inside Iran.

The above information has been taken from the website "All Things Pakistan", refer below.