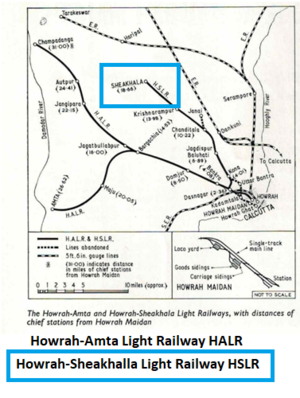 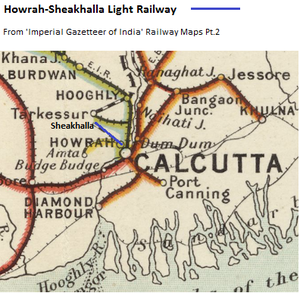 The HSLR was one of several small narrow gauge concerns owned and worked by Martin's Light Railways, a management company based in Calcutta. [2]

On 12 June 1889 an agreement was signed between the District Board of Howrah and Messrs. Walsh, Lovett & Company on behalf of the Bengal District Road Tramways Company; this gave the Company the right to construct and work a tramway over a portion of roads [1]. This was subsequently renewed with Martin's Light Railways Co Ltd and sanctioned by Government notification in the Calcutta Gazette of 27 March 1895 [2]. On the 19 Jun 1895 the ‘Howrah-Sheakhalla Light Railway Company’ was formed and worked by Martin's Light Railways (MLR).

The first 2½ miles(4km) from Telkal Ghat on the Hooghly river was owned by Howrah-Amta Light Railway to Kadamtala station and also used by the Howrah-Sheakhalla Light Railway, both being worked by MLR.

Here the lines separated with the Howrah-Amta line running west, chiefly along the side of the Jagatballabhpur road, and then went south-west to Amta.

The Howrah-Sheakhalla Light Railway started from Kadamtala station running north-west along the Benares road to the border of the district, and thence to Sheakhala in the Hooghly district. [2].

The Amta and Sheakhala companies both prospered and by 1904 the shareholders were already getting dividends of 7 and 5 per cent respectively. By 1914 over 2,500,000 passengers were being carried annually on the two lines, and by 1928 the number was nearly 4,000,000. Working frequent trains through the streets of Howrah, each preceded by a runner with a bell to warn pedestrians, became a major headache and from September 26, 1939, after the Municipality had refused to renew the existing agreement, Kadamtala became the terminus and the line to Howrah Ghat was abandoned [3]. The lines continued to operate privately long after Independence in 1947 [2], and this line was finally closed in 1971 [4]

The following is the progress in opening[5]:-