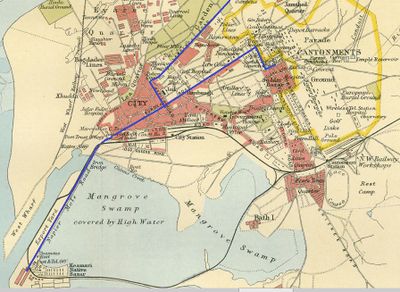 The Karachi Tramway first opened for traffic in 1885 as a steam tramway between the port of Kimari and running through the Karachi city streets. The Rail Gauge was a unique 4 feet (1222 cm) (see Gauge Note). The steam tramway was replaced with a horse tramway a year later. In 1902 the East India Tramway Company Limited was formed and between 1909 and 1912 the horse trams were replaced with distinctive-looking petrol cars. There were 64 of these in service in 1955 when the company celebrated its 70th Anniversary. The petrol trams continued in service until April 30, 1975[1].

The Karachi Tramway owes it origin to the Karachi Municipal Secretary and Engineer, James Strachan who first conceived the idea and in 1881, Mr. Edward Mathews of London submitted the tender for building this tramway network. It took until 1883 to complete all the formalities and to get Government’s permission to use Steam as the locomotive power for the trams. Actual construction work started in October 1884 [2]

The line running south east from Karachi city to Kiamari was named the Napier Mole Tramway - see separate page, the first tramway track in Karachi, inaugurated in 1854 and later became the NWR mainline. The line to the south was the Karachi Tramway, following Kiamari Island, crossing by the ‘bridge’ (shown on map) to the streets of Karachi township]]

In April 1885 the first public tram line in Karachi was opened for traffic. There was a ceremonial opening of the Main Line from Scots Kirk neat St Andrew’s Church (located on present day Abdullah Haroon Road and Shara-e-Liaqat intersection) to Kiamari. Goods line between McLeod Road (now I.I. Chundrigar Road) and Native Jetty were also completed.

In 1886, steam powered trams were replaced by horse driven tramways. This was to the great satisfaction of city residents because the steam engines proved to be too noisy in the residential and commercial areas. The frequency of Steam trams was once every 15 minutes in busy areas and that made the residents quite uneasy because of the noise. After horse trams were introduced, Steam trams were relegated to shunting in depots only whereas light one-horse tram cars took their space on Karachi roads. Horse trams were much cheaper to operate as compared to the steam locomotives fired with coke. The coke had to be shipped from England at a great expense, as Karachi could not afford any supplies, and in Bombay local demands required the whole output of the gas works [2].

The Chief Engineer was John Brunton, whose name was long known in Karachi in connection with the Karachi-Kotri section of the Scinde Railway line which had been constructed under his supervision [2].

In 1902 the East India Tramway Company Limited was formed with John Abbot as Chairman [2].

Very soon the horse driven tramways became bigger than ever and by 1905 some of carriages were converted to light railways and the tramway started moving not only passengers but also freight across the city by using petrol engines.

John Abbot was also a founder of the British ‘Motor Rail and Tramcar Company Ltd.’. In 1907 experimental work began on a scheme to motorise the trams using petrol engines combined with mechanical and later electrical transmission. This resulted in a patent application (British Patent No. 18314/09) in 1909 by John Abbott’s son, John (Jack) Dixon Abbott, for the “Simplex” gearbox. This simple yet rugged design utilised three parallel gear shafts, providing forward and reverse gears in two speeds [3].

By 1909 the Horse-drawn service was being replaced by Petrol driven trams. Petrol trams had a capacity of 46 passengers each and could run up to speeds of 18 mph. Tracks were re laid for petrol driven trams. By 1912 Horse traction was completely suspended and by the end of 1913 the number of Petrol run trams in Karachi was 37 [2].

The 4ft 0in (1222cm) Gauge specified is most unusual and we have classfied this as a Unique Rail Gauge.

Some other known examples of this gauge are:-