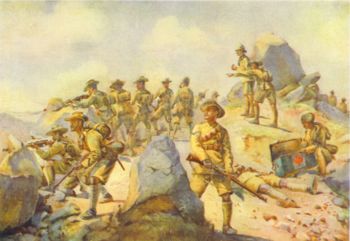 Regimental War Diaries are available from the National Archives, Kew, England. Note that many of these are hand written, however transcribed editions are available for Gallipoli, for the 4th Gurkha Rifles and for the 29th Indian Infantry Brigade, of which the 4th Gurkha Rifles was a part, edited by Martin Gillott. publisher Great War Diaries, in Kindle editions which have a Search facility (anyone with Kindle Unlimited can read them for free). (Download of a free Kindle App is available, you don't need Kindle).

Bugles and a Tiger, a Volume of Autobiography 1956 may be borrowed from the Internet Archive Lending Library. Only one person at a time is able to borrow, so you may need to wait for the book to be returned, First you must sign up with the Open Library
The Road Past Mandalay by John Masters 1979. Internet Archive (Archive.org) Lending Library. Earlier title: The Road Past Mandalay : a Personal Narrative. First published 1961. 2nd volume of Autobiography. The short first part takes Masters and the 2/4th Ghurkas to Iraq and Syria. After a staff course back in India, the balance of the book concerns his time in Burma, with a Chindit Column. Also see the Fibiwiki page John Masters.

The Gurkhas by James, 1965. Link to a pdf download, PAHAR Mountains of Central Asia Digital Dataset. Scroll down Nepal Books to 1965.