The Arakkonam-Conjeeveram Tramway was a 3 feet 6 inches" (1067mm) Rail Gauge line († see Gauge Note) which opened in about 1864-65.
The Tramway was constructed by the Indian Tramway Co.(ITC) , a company that was formed in 1862 to build short lines around Madras, with a 20-year subsidy from the Government of India but with no Guarantee.
The Tramway ran between the towns of Arkonam and Conjeeveram ( ‡ see Spelling Notes) 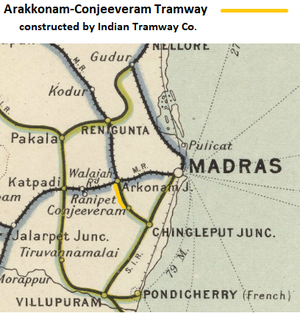 The records [1] state:-
The 'Indian Tramway Company' constructed a light railway for the distance of 14 miles and 22 chains (14.275 miles/23km) commencing from the Arconum ‡ Station, along and upon one half of the Government road towards Conjeveram‡ , and the remainder of the railway being a distance of 4 miles and 43 chains (4.537 miles/7.3km), together with the stations, sidings, engine-houses, storehouses, and other buildings, made and constructed by, and at the cost of, the Company, upon land taken up by, and at the cost of, the Government, and made over to the Company free of charge.

The ITC suffered losses and in 1870 went into liquidation. The lines were taken over by the ‘Carnatic Railway Company, a new company formed for the purpose.