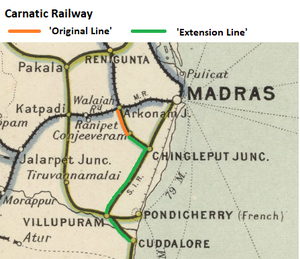 The Carnatic Railway(CAR) was formed in 1870 to acquire the operations and line and equipment of the Indian Tramway Co., a company which went into voluntary in liquidation
See separate page ‘Indian Tramway Company’ for further information

The Contract [1] shows that the only line that had been constructed by the ‘Indian Tramway Co.’, was the ‘Arakkonam-Conjeevaram Tramway’, a 3 feet 6 inches(1067mm) Rail Gauge line of which "opened for traffic about 1 Aug 1865" and ran between the towns of Arkonam and Conjeeveram, a line length of 18.8miles (30.3km).

The Contract specified that the Company shall alter the gauge of the ‘Arakkonam-Conjeevaram Tramway’, described as the ‘Original Line’ in the Contract, to 5 feet 6 inches broad gauge(BG) throughout. It is thought that the line from Arkonam Station to Conjeeveram was in the process of being converted to BG, probably in late 1870 or early 1871 but exact date not known, but then changed to metre gauge(MG).Note there is still conflict regarding these dates

The “1870-71 Annual Report for Indian Railways for the Carnatic Railway“ gives the 19 miles(30.5km) of line opened as 3 feet 3 3/8 inches which is metre gauge(MG), with 100 miles (161 km) sanctioned and 81 miles(130.5km) to be finished’. The Report also details the ‘progress of the railway and the commercial summery’ - see separate pages for Report details.

The Contract also specified that the Company shall undertake the construction of an BG ‘Extension Line’ from Conjeeveram to Cuddalore.
It is clear that this “Extension Line” was not constructed by the ‘Carnaic Railway Company’.

It was not until 1881 when the ‘South Indian Railway’ (SIR] opened the extension from Conjeeveram to Chingleput Junction (see ‘Later Developments - 1881’ below).

An on-line search of the IOR records relating to this railway [4] gives 7 references. The most important being:-

Unfortunately, there are no ‘Carnatic Railway’ staff records held in the India Office Records at the British Library.

See Arakkonam-Conjeevaram Tramway
and Indian Tramway Co. for early history up to 1870.