The Dhrangadhra Railway (DR) was a short metre gauge(MG) line constructed for and owned by the Princely Dhrangadhra State. 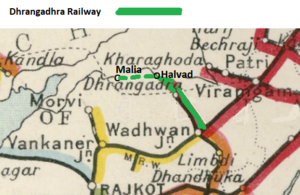 1898. The first section of the ‘Dhrangadhra Railway’(DR) from Wadhwan to Dhrangadhra, 20½ miles(33km) opened [1].
There was an interchange at Wadhwan to the broad gauge(BG) Bombay, Baroda and Central India Railway(BB&CIR) ‘Viramgam-Wadhwan Branch Line’ which had opened in 1873.
In 1902 this branch line was converted to MG connected at Wadhwan Junction the DR directly with the BB&CIR.

1911. Upon the collapse of the BGJPR the working of the DR was undertaken by the Bhavnagar State Railway(BSR)[1].

1915. An application was made for a further extension of the line from Halvad to Malia.
This caused an appeal by Morvi State that the line would be prejudicial to their 'Morvi Tramway' that had been constructed from Morvi to Malia and served the north-east part of Morvi territory. This tramway to Malia had been completed by 1910[2].
However this line that had at one time reached Malia had been removed at Malia’s expense back as far as the State line, and finished at Khakhrechi Road [3]. The Bombay Government initially decided that the 'Morvi Tramway' to Malia should be reinstated, but the requested Dhangadhra link to Malia would be preferred. This was intened to stop a disagreement between Morvi and Dhangadhra but only caused Dhangadhra and Malia to refuse to assist the Government and Morvi Engineers.
Eventually in 1925 Dhrangadhra State was given approval for the extension to be built by 'Dhangadhra Railway'[3] see 1925 below

1919. The working of the DR transferred to the Bombay, Baroda and Central India Railway(BB&CIR) [4].

1925. The further extension from Halvad to Malia was approved for construction after 10 years delay from application [3].
The date of opening of this ‘Halvad-Malia Extension’ of approximately 25 miles(48km) has not been found, but it does appear on modern maps.

An on-line search of the IOR records relating to this railway [5] gives the following: -