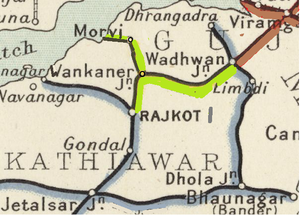 The Morvi Tramway and Railway was owned and managed by the Princely Morvi State.
The development commenced as the narrow gauge(NG) Morvi Tramway
Progressively the lines were converted to the metre gauge(MG) Morvi Railway

The original section from Wadhwan via Wankaner to Rajkot was built as a 2ft 6in/762mm narrow gauge(NG) Tramway . Construction started in 1884, the line was 79 miles(127km) and opened to traffic in 1886 [1] forming the ‘Wadhwan-Rajkot Section’.
* The original terminus at Wadhwan was on the south side of the Bhogava River at Surendranager . The Agreement stated the Tramway would not link to the ‘Bombay, Baroda and Central India Railway ’(BB&CIR) [2] and also not link to the ‘Bhavnagar State Railway’ or the ‘Dhrangadhra Railway’.
*The Tramway passed via Dolia and Sayla through various small States, none of which received any compensation from the Morvi Durbar to which they were legally entitled. The Wadhwan Durbar refused the Tramway entry into Wadhwan without an acceptance that Wadhwan owned the rights of passage over the Bhogava River Bridge, and that such duties as required would be paid[2].

1887. The NG Tramway from Wankaner continued northwards to Morvi, a distance of 15¾ miles(25km), opened in March 1887 [3] thus connecting Morvi to Wadhwan
Some early records refer to the complete line as the Wadhwan-Morvi State Railway.

1891. The NG Tramway was extended to the port of Navlakhi to become the ‘Morvi-Navlakhi Section’, 30 miles(48km)[3] and a spur to Wawainia Port laid by the road side, which the Morvi Durbar said was for the convenience of the people and for transportation of salt and cloth[4].

1891. The NG Tramway was extended using the Bhogava River Bridge and reached the station of the BB&CIR at Wadhwan. This was against all the previous agreements which led to legal notices being given to the Managers of BB&CIR and Morvi Tramway, terms were finally agreed in 1897. [5]

1893 and 1897. 'The “Morvi Tramway’ interchanged at Rajkot with the metre gauge(MG) ‘Jetalsar-Rajkot Railway’ southward when it opened in 1893 and later in 1897 north-westward with the opening of the ‘Navanagar State Railway’.

1910. Further NG Tramways were also built from Morvi via Jetpur and on to Malia, and another southeast from Morvi towards Tankara, both in operation by 1910 [7]. The Tramway that had at one time reached Malia had been removed at Malia’s expense back as far as the State line, and finished at Khakhrechi Road [8]

1923. The ‘Rajkot-Betti Tramway’ NG opened from Rajkot to Betti , 14 miles(23km) to the east of Rajkot . The NG locomotives were ordered by the Thakor of Morvi so it can be assumed they were operated as part of the ‘Morvi Tramway’ system -see separate page Shown in ‘Red’ in the ’Schematic Map’

1926. The ‘Morvi Tramway’ added the NG ‘Sanala –Khanpur Branch’ 14.3 miles (23km) opened and the next year the line to Khanpur was extended to the State boundary and also 6 miles northward from Khakhrechi Road [9].

Notably neither the 1931 ‘Gazetteer of India’ Map [10] and the 1937 ‘History of Indian Railways, constructed and in progress’[3] show any evidence of any remaining NG Tramways . So consequently it is assumed that these minor branches had been discontinued by 1931 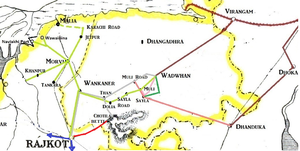 These Railway Lines are shown in ‘Grey’ in the schematic map

1905. The Morvi Durbar opened their ‘Wadhwan-Rajkot Section’ , 74 mile(119km) , as a metre gauge(MG) Railway. By part converting the NG Tramway and part on a new alignment:-
*‘Wadhwan-Than Section’, 31 miles(50km), was constructed on a new alignment [3] as its was not safe to do on the existing road . The railway was built on a slightly different alignment and diverted to the north 4 miles (6.4Km. This meant closing some stations like those in Dolia and Sayla. The railway was now north of the Bhogava River and was able to directly connect to the MG railways at Wadhwan [9].The new alignment had reduced the line length by 5 miles(8km).
*‘Than-Wankaner-Rajkot Junction Section’, 43 miles(69km), was converted to MG on the original NG 1886 alignment with a few unimportant diversions[3].
This enabled direct MG connections to existing railways:-
*Wadhwan Junction, to the ‘BB&CIR’, the ‘Dhrangadra Railway’ and the ‘Bhavnagar State Railway’
*Rajkot Junction to the ‘Jetalsar-Rajkot Railway’ running south and the Navanagar State Railway running west .Both marked ‘Blue’ in the schematic map

1948. The ‘Morvi Railway’ was merged to form the ‘Saurashtra Railway’

No personnel records have been located:-

The following found from various sources:-