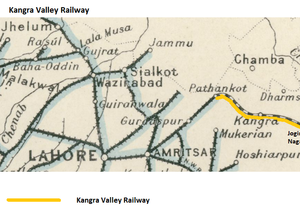 The Kangra Valley Railway was a 2ft 6in/762mm narrow gauge(NG) mountain railway branch of North Western Railway(NWR), climbing from the Punjab plains up into hills of Mandi State . The Pathankot to Nagrota section, 68 miles(108 km) opened in 1928 and Nagrota to Joginder Nagar section, 36 miles(57 km) in 1929. [1] [2]

In 1925, the Punjab government started the ‘Uhl River Hydro Electric Project’ of constructing a dam across Uhl river at Barot. To transport heavy plant and machinery for the project, a metre gauge tramway from Mukerian to Shanan was proposed. This was changed to a two-feet six-inch gauge by the Railway Board and construction by the Lahore division of the North Western Railway began in 1926 [2] .
See Shanan Hydro Electric Construction Transportation for details of the vital role performed by the ‘Kangra Valley Railway’ in the carriage of materials to the Hydro Electric works.

The gauge is 2 ft. 6 in., and, though the ruling grade over a part of its length is 1 in 50, it has a final ascent of some miles at 1 in 25. The principal feature of this line is the heavy bridging involved almost throughout; the aggregate length of the steel girder bridges is 11,000 ft. Among other bridges is the first steel arch in India, known as the Reond Arch. It bridges a cleft in the hills 200 ft. deep with two 40-ft. approach spans and a single main span, with a steel arch, 180 ft. long. This arch was made entirely in India. The delicate operation of erection was successfully carried out by the Bridge Department of the North Western Railway.

Temporary tramways were used during the construction, 7½ miles(12km) were used for the cuttings at Banganga, Nagrota Pass, Paror and Bir Kand [3].

The following description is given in the 1930 Report:- [4]
The railway is a single line of 2' 6" gauge and its length from Pathankot to the store yard at Shanan is 103.1 miles.
Pathankot- Baijnath, the ruling gradient is 2.5 per cent. (1 in 40)
Baijnath-Jogindernagar (passenger terminus), the ruling gradient is 4 per cent. (I in 25)
Jogindernagar- Shanan Store Yard, a 5 per cent. (l in 20) grade has been adopted, this portion of the line being treated as a siding, the terminus for passenger traffic being Jogindernagar.
From mile 46, the alignment follows the precipitous gorge of the Banganga River involving very heavy construction. This section includes a large bridge over the Banganga, with a main span of 250 feet and several large bridges over ravines, including the Reond Steel Arch of, 180 ft. span. The Bathu Khud, an important tributary of the Banganga, is crossed by a bridge of 10 spans on piers 100 ft. High
Two tunnels—the Dhurdni, 254 ft. long, and the Daulatpur, 1,000 feet long— were necessary; both are lined throughout. There are many deep cuttings and heavy retaining walls on this section. The ruling grade (1 in 40) is used throughout.
The line emerges from the Banganga gorge at mile 66 and from here to the Nagrota Pass at mile 71, there is little of interest. Considerable development on the 1 in 40 grade and fairly heavy work were required to negotiate the Nagrota Pass and Parar Ridge. From mile 73 to mile to mile 88 (Baijnath Station) the line crosses a series of ridges involving deep cuttings and high embankments.
From Baijnath Station, mile 88, to the top of the Ajhu ridge at mile 95, the ruling grade of 1 in 25 is used throughout. From Ajhu to Jogindernagar (mile 102), the line falls.

The 1930 Report states:- [5]
The preliminary or reconnaissance survey was commenced in April 1925 and continued until early in 1926. By October 1925, sufficient progress had been made to determine the ruling grade and maximum curvature up to Baijnath. Early in 1926 detailed location was started and continued up to July 1927. A statement in the Agent's letter of 18th-19th May 1927, that "the full detailed survey has only just been completed to Shanan this month" refers to the survey work; the actual location was not staked out until July.
Construction was sanctioned in February 1926, and, in May, His Excellency Sir Malcolm Hailey. the Governor of the Punjab inaugurated the construction work at Pathankot. Actual construction started soon after, but not much progress could be made during the monsoon. Linking in of the track had commenced in July 1926 and reached mile 48 (the Banganga Bridge) on June 1st, 1927 and was held up there for the erection of the 250 ft. span of the Banganga Bridge.
The Chakki, Gorelli and Gajh bridges had not been completed, but the track was linked in by means of temporary diversions across these rivers in order to avoid delay; the bridges were fortunately completed just before the monsoon so that the track could be transferred to them and the diversions removed, thus enabling communication up to mile 48 being maintained.
Unprecedented floods occurred in May 1927. The service girders and erection trestle of the Banganga Bridge were washed away so that railhead was held up until the end of year, and this resulted in a delay of 6 months in opening the line.
These floods, and others during the monsoon proper, were the severest experienced for 24 years and did a great deal of damage to the works in progress.
By March 1st, 1928, railhead had reached mile 62, and by 18th November 1928, railhead reached the Hydro-Electric Power House site at mile 103. During the monsoon of 1927, the line was closed for 2 months and, during the monsoon of 1928, for 2 months.
The line was opened for goods traffic at the end of November 1928 and for passenger traffic, in April 1929.

During the Second World War, a number of uneconomic lines were dismantled and material was shipped for British operations in the Middle East. The Nagrota to Joginder Nagar section was dismantled and operations were closed in 1942. (Reopened 1954)

The report from the British Library ‘India Office Records’ [6] dating from 1973, is post-independence, but included for interest:-

An on-line search of the India Office Records (IOR) records held at the British Library relating to this railway [7] gives the following:-