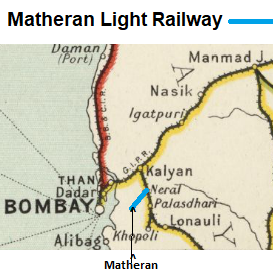 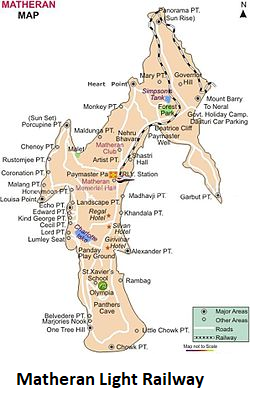 The Matheran Light Railway(MLR) was a 2ft/610mm narrow gauge(NG) mountain railway near Bombay (Mumbai). The privately financed line was 12 miles(19km) in length between Neral and Matheran and opened in 1907. At Neral there was an interchange with the broad gauge(BG) Great Indian Peninsula Railway ‘GIPR South East Mainline’ 20 miles(32km) south-east from Kalyan.

The line was owned by the ‘Matheran Steam Light Tramway Company’ who provided all the ‘rolling stock, locomotives and plant, and maintain the way and works.... the keeping and auditing of the Revenue Accounts being under the control of the ‘Great Indian Peninsula Railway Company’ (GIPR) [1].

The ‘Matheran Steam Light Tramway Company’ was established under the Indian Tramways Act of 1886 and the Matheran Tramway Order of 28th July 1904 by their Agents ‘Messrs. Sir Adamjee Peerbhoy and Sons’, Bombay [2]

A new Agreement dated 12 Aug 1918 transferred from the GIPR back to the MLR the “provision of Traffic and Telegraph staff and audit of the Revenue Accounts and Expenditure inclusive of supervision thereof”. It also confimed that “the Tramway shall be solely responsible for the provision of Rolling Stock. Locomotives, Machinery, Furniture, Fittings, Plant and Appliances necessary for the purpose of working the Tramway and for keeping the same in order and up to the standard of efficiency for such working.” [2]

Everard Richard Calthrop was the consulting engineer. Unusually for a railway for which he designed it was of 2ft/610mm narrow gauge(NG), with tight curves and 1 in 20 (5%) grades. [3]

Matheran was identified by Hugh Poyntz Malet, the then District Collector [4] of Thane district in May 1850. Lord Elphinstone, the then Governor of Bombay laid the foundations of the development as a future hill station. The British developed Matheran as a popular resort to beat the summer heat in the region [5].

The GIPR from Bombay had reached Thane in 1853 and Kalyan in 1854. The GIPR ‘South East Line’ from Kalyan reached Neral (which was to become the terminus of the MLR) in 1856. However there was no attempt to develop rail access to the Matheran Hill on the edge of the Western Ghats.

Unlike the other hill railways, the credit for setting up the railway line to Matheran goes to an Indian. Abdul Hussain son of the business tycoon Sir Adamjee Pheerhoy of Mumbai was a regular visitor to matheran at the turn of the century, After having obtained reluctant consent from his father, young Abdul Hussain camped at Neral in 1900 to plan for the narrow gauge line. The construction of this line was authorised by the Public Works Department. Abdul Hussain floated a company with the title of “Matheran Steam Light Tramway Company” with a share capital of Rs.10,00,000/- wholly owned by the Peerbhoy family. Work began soon after and the ‘Ilustrated Weekly’ dated 11 th April reported that the work was progressing satisfactorily, “This is a prospect of it being opened in time for the hot weather traffic. The engineering difficulties have been surmounted, substantial work has been accomplished and Mr. Adamji Pirbahi, has the satisfaction that the cost is well within the estimate.” The line opened in March 1907 [6].

The 1937 ‘History of Indian Railways’[8]gives the following:-