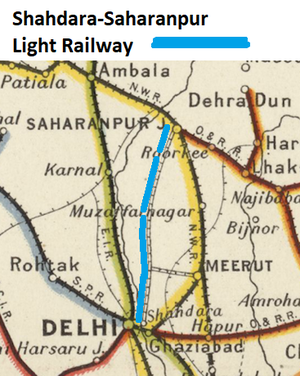 The line, which ran north from Shahdara (Delhi), one of the north-eastern suburbs of Delhi, to Saharanpur, a junction on the Meerut to Umballa section of the North Western Railway with the Oudh and Rohilkhand Railway. The SSLR was distinguished as the first and only narrow gauge line to originate from Delhi. The SSLR was one of several small narrow gauge concerns owned and worked by Martin's Light Railways, a management company based in Calcutta.

The 1909 map (shown here) indicates the ‘Shahdara-Saharanpur’ narrow gauge line.
The map shows a narrow gauge(NG) branch line about 25 miles(40km) from Shahdara, this would be near the town of Baraut, and running to Meerut, where there would be an interchange with the broad gauge(BG) ‘North Western Railway’
There is no evidence this branch line was constructed.

According to IRFCA, the line closed in 1970 but was later taken over by Indian Railways, the line being converted to broad gauge and re-opened to traffic.