Difference between revisions of "24th Regiment of Punjab Infantry" 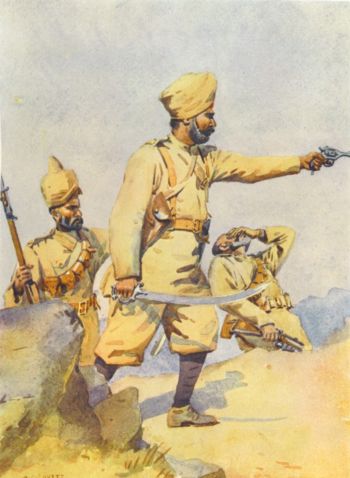 '24th Punjabis' from a painting by Major A.C. Lovett

24th Punjabi troops took part in the Boxer Rebellion, or 3rd China War, and were awarded the China Medal with Relief of Pekin clasp.[1]

Regimental history: War Records of the 24th Punjabis 1914-20: 4th Battalion 14th Punjab Regiment by A. B. Haig, previously Commanding Officer of the Regiment. First published 1934.
Available in a reprint edition, which in turn is available online on the Ancestry owned pay website fold3, see below.

The regiment fought in the campaign in Mesopotamia (today’s Iraq) from April 1915. It took part in the battle of Shaiba, the advance to Ctesiphon, and the retreat to Kut-al-Amara that followed. The 24th was effectively destroyed in the subsequent siege. The survivors were compelled to surrender when General Sir Charles Townshend capitulated in April 1916 and subsequently suffered greatly in Turkish captivity. The Regiment was subsequently reformed with new personnel and again served in Mesopotamia – and later in Salonika, south Russia and Anatolia between 1917 and 1920.[2]