The Aden State Railway operated from 1916 and 1929 in Aden, a dependency of of the Bombay, British Colony and Protectorate, in the south-west corner of Southern Arabia. The metre gauge(MG) railway was 29 miles(46km). The railway was worked by the North Western Railway of India under one of its officers who was designated ‘Engineer-in-Charge’ [1].

The Aden Settlement was established on 19 January 1839 when elements of the Royal Marines were landed at Aden by the East India Company to occupy the territory and to stop attacks by pirates on British shipping. Initially part of the Bombay Presidency and later a "Chief Commissioner's Province," Aden remained a part of the Indian Empire until 1 April 1937 when it was detached and re-organised as a Crown Colony of the United Kingdom.

Following the end of the Abyssinian Campaign in 1868, some of the railway equipment that had been used were sent to Aden. A small shed and workshop had been constructed to contain the two locomotives, wagons, rails and equipment. The intention was to build a railway from the pier head to the post office and possibly on to the cantonment. The line was considered to be a purely military venture and not expected to pay its own expense and that the main user would be the Commissariat Stores. The equipment was still in store in 1871-72 and the last record was 1872-73 [2].

The first request to build a railway in Aden came from Mr G Kirkpatrick in 1904 who asked for a concession to build a railway to Dthala via Lahej and this was put on hold subject to a Government decision on railway projects. He also made a request to supply electricity and run a tramway. General Maitland the Political Agent in Aden was in favour of the railway line. The Secretary of State for India was not so keen, and the Political Committee opposed the idea. [3]

The next application was from Messer's Cowasjee and Dinshaw and Brothers of Aden who had entered into an agreement with Abdali Sultan, for the construction of a Railway within Abdali Sultanat limits from Nobat Hakim to Bar-al-Amir, and the request of that firm for a concession to extend the proposed line into Aden. In reply to the request S. M. Fraser, Esq., C.I.E., Officiating Secretary to the Government of India, Foreign Department, stated that:- “I am to state that the Government of India are now prepared to consider favourably proposals for the construction of a Railway by private enterprise from Aden into the interior, but before accepting the present offer from Messrs. Cowasjee Dinshaw and Bros., they would suggest, for the consideration of His Excellency the Governor in Council, that an opportunity of submitting definite proposals should be offered to other applicants of good financial position who, in the past, have expressed their desire to open up railway communications with the Aden Hinterland” [4].

Unfortunately the Resident in Aden took exception to certain points in the terms of the agreement with the Abdali Sultan for the construction of a line in his territory, and suggests the insertion of certain provisions to be framed on the lines customary in the case of an agreement for the construction of a railway in India, and under Indian conditions. Abdali Sultan in assuming that, as the proposed Railway lies within his own limits, no reference to the British Government or to its representative in Aden was necessary, but that this was clearly inconsistent with the actual Treaty of relations into which the Abdali Sultan had entered with the British Government.[5].

The circumstances at Aden, however, are so different from those in India that to insist on the application of Indian regulations, would probably result in the indefinite postponement of the construction of any railway in the Aden Protectorate. As a consequence, the Bombay Government could not recommend the above proposals.

The letter No. 984, dated 26th August 1904, to the Deputy Adjutant-General, Western Command, recommended:- “The transfer of the Dthala Garrison to permanent barracks to be constructed on Jebel Jihaf about 10 miles from Dthala. This cantonment would be about 7,000 feet above the sea and would serve as a hill sanatorium, a most urgent need owing to the trying climate of Aden “ [6].

In a letter dated 14th October 1905 Colonel R.I.Scallon, the General Officer Commanding the Aden Brigade wrote:- “For more than two years, for political and other reasons a garrison or half a British battalion, a battalion, Native Infantry, and a detachment of Royal Artillery has been maintained at Dthala about 100 miles north of Aden near the boundary of Turkish Yemen, and it will be necessary to maintain some such garrison for a considerable time to come practically permanently. These troops have hitherto been under canvas, an expensive and unsatisfactory way of housing men for a long period. The communication to Dthala is by camel only; the first half of the journey across a sandy desert; the second half by a narrow track through the hills along beds of streams and by very steep zig-zag up to the plateau of Dthala which is about 5,000 feet above the sea."

A draft proposal was put forward in November 1905 to the Sultan and the British Government by Lieut-Colonel R. Leigh, R.E., Assistant Commanding Royal Engineer who had been engaged in drawing up the line and at the time touring within Abdali limits between Dar-Al- Amir and Nobat Dakim for that purpose [7]. A map was submitted i(but quality insufficient to show [8]. In his report he suggested:- “That the line would follow the road and that way would limit the expense of bridges, with an even slope and without valleys or hills. In Aden it is suggested that a station should be located south-west of Maala, and a small branch line run to Maala Wharf. From Maala the best line seems to be to tunnel under the hill and run out through the Small Isthmus. Stations are also proposed at Khormaksar and Sheikh Othman. It would be a great convenience to extend the line from Maala to Steamer Point which can be done by running the line on the north side of the main road with a terminus on the newly reclaimed land at Tawahi” [9].

Major General H. M. Mason, Political Resident at Aden, commented “As to the extension of the line above Nobat-Dakim, I am of opinion that this will be desirable at as early a date as possible in the direction of Mavia by which the more important caravans of the fertile Taiz district now proceed”

Meanwhile in February 1906 the Aden Chamber of Commerce reported that on 30th January and the following resolution, proposed by Mr. J. Parker (National Bank of India) and seconded by Mr, H, Adamally, was carried unanimously:- “The Chamber urges Government to give every possible facility to anyone willing to construct and manage a railway as far as possible towards the interior, preferably by way of D’thala, and consider it would be in the interests of the general public to have the work started without delay” [10].

By this time there was a growing concern with the interference of the Otterman Empire in the tribes in the Aden Area. Whilst the British Government stated that:- “We have never desired to interfere with the internal and domestic affairs of the tribes. On the other hand, we have throughout made it perfectly plain that we should not tolerate the interference of any other Power with them.”

In 1906 Killick Nixon and Company were approached by some of thew Aden Businessmen to take on the project. The company already had built railway lines in India. But this was turned down [11].

But by 1907 the Government in England was again against the railway as it may inflame conditions between the Ottomans and the British and things were left to drift.

In March 1909 Cowasjee Dinshaw & Bros. again, requested of Sultan Sir Ahmed Fadhl, K. C. S. I. Sultan of Lahej. This time “to build a light railway of 2’ 6” (762mm) gauge in Your Highness’s territory, provided the English government will consent to same. The resident General de Barth was against and nothing happened, and the matter seemed to be closed.

Then Messrs. Menahem Messa proposed a construction and working of a 2 ft. 6 ins. (762mm) gauge steam tramway at Aden from Tawahi to the Crater, with a branch to Sheikh Othman. Since the proposal was limited to British territory, it is essentially different from those which were discouraged in the past, and the report of the Railway Board is almost exclusively concerned with considerations of finance and construction as distinguished from questions of policy. The British Government was still against it [12].

In 1910 The French proposed a line from Hodeidah-Sana but there was a problem with negotiations in Constantinople and lack of funds. (Sana being in what is now Yemen). This all fell through in 1911. As a consequence, questions were asked in the British Parliament as to why nothing had been done regarding the line from Aden. This was reported in Hansard in May 1911 [13]. "The tribes in the hinterland were all pro-British and were concerned with the continuing disruptive influence of the Otterman Empire" [14]. 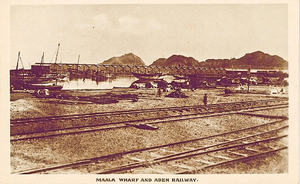 In order to support operations against the Ottoman Empire, the Royal Engineers built a military railway in 1915-1916 from Aden to Sheikh Othman, the border with Turkish Yemen. The first section of the line from Ma’alla (Inner harbour, Aden) to Sheikh Othman, a distance of 7 miles (11km) opened Jan 1, 1916[1]. 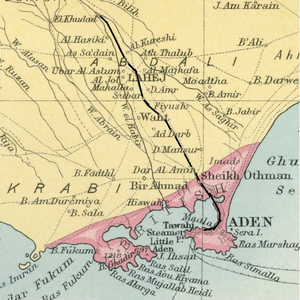 On May 7, 1920 the Government of India(GoI) transferred the railway from military control to that of the Railway Board creating the ‘Aden State Railway’ under the control of Mr Affleck who was designated ‘Engineer-in-Charge’ [1].

In 1922 the line was opened up to public use, carrying traffic between Aden and Yemen and military supplies to the outpost at Sheikh Othman. The line was worked by the North Western Railway under a designated Engineer-in-charge. The line proved too costly to maintain and was closed in 1929 before being dismantled in 1930 [16]

No specific staff records have been identified.

Records relating to the construction and dismantling of Aden Railway are held in the India Office Records at the British Library. An on-line search of the IOR records relating to this railway [18] gives a number of entries, the most significant being :-