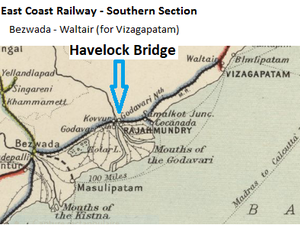 The Bridge was named after Sir Arthur Elibank Havelock, the then Governor of Madras.

In 1901 the southern section of the East Coast State Railway - which included the ‘Havelock Bridge’ - was transferred to the Madras Railway(MR) in 1901; subsequently renamed Madras (North-East) Railway; becoming the Madras-Waltair NE Mainline of the Madras and Southern Mahratta Railway(M&SMR) in 1908.

In 1946 there was complete ‘re-flooring’ of the bridge by replacing the wooden longitudinal and wooden sleepers with a steel system [2].

The bridge was decommissioned in 1997 replaced by the Godavari Arch Bridge [1].