In 1856 a proposal to provide a Tramway to connect to the Iron Mines in the Kumaon Division was put forward by the North of India Tramway Company Limited. The project did not proceed - see seperate page for details.

A later proposal in 1859 for the Kumaon Iron Works Tramway was put forward to survey and construct a railroad or tramway, to connect the ironworks in Kumaon Division with the trunk line of the railway in the Upper Provinces [1].

It is not known if this tramway was ever constructed; but in any event the Iron Works closed in 1864. 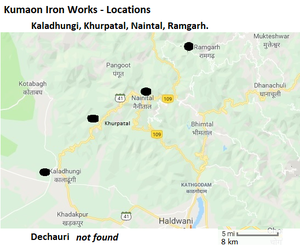 Iron smelting in Kumaon to place due to the high-quality iron ore, rich forests for charcoal and an abundance of running water as a source of energy. The deputy collector, J. O'B Becket, wrote a report on traditional iron making in Kumaon. He reported that 7 iron ore mines employing 187 families, 54 smelting forges using 167 families and 86 refining forges with 273 families in work [2].

After the report of the 1850s, a small group of British individuals started to promote and develop iron making. This led to the establishment of iron working sites at 4 places: Dechauri, Kaladhungi, Khurpatal and Ramgarh. Rees Davies was one of the surveyors deputed to investigate the mineral resources. As a government enterprise, the first blast furnace of the works was ignited in Dechauri on 24 March 1856 and as a result of this a piece of iron of "the very best quality" was produced. Davies resumed his trials in 1857 the first pig iron was tapped. These results induced the government to engage in a bigger undertaking and W. Sowerby was appointed manager of the works. A new blast furnace, called "Sowerby's blast furnace" was built at Dechauri and ignited in February 1860. But the furnace was closed after 43 days and the government stopped the project due the controversy that surrounded it [2].

The Kumaon Iron Works was formally launched in 1856, it had been known for at least 30 years before that date that Kumaon had indigenous ore and smelting using the plentiful wood fuel. In 1856 the Government, with the help of private capital, supported two small smelting workshops already working in the area and in 1862 formed the ‘North of India Kumaon Iron Works Company’ The enterprise could see the potential demand for iron from the railways. But it faced an insurmountable obstacle in accessing and transporting wood as a fuel source [3]

In the beginning of 1861 Drummond formed a new private company that was soon amalgamated with Davies's company to form ‘’The North India Kumaon Iron Works Company Limited”. During this time there were 8 blast furnaces in different stages of development close to Nainital, Dechauri, Kaladhungi, Khurpatal and Ramgarh[2]..

In 1862 the Secretary of State ordered to lay down the Tramway line near Khurja station. ‘Kumaon Iron Works’ in hope that the iron would be taken from it for the rails produced iron of good quantity, but suddenly the Government dropped the idea of laying the line itself and gave a contract to the Awadh and Rohilkhand Railway Company (formerly called the Indian Branch Railway Company) [4]