The North of India Tramway Company Limited was first floated in 1857 with the issue of its Prospectus “Tramroads in Northern India, in connection with the Iron Mines of Kumaon & Gurhwal” by Mr W. P. Andrew [1] (Mr Andrew was the Chairman of the ‘Scinde Railway Company’ - see separate page) .

Note: Town name spellings are used in the 1840-50's as given in the Prospectus and Reports. Later names are entered as (italics in brackets)

There is no evidence that the shares were ever offered for sale and certainly the Tramroad was not constructed. 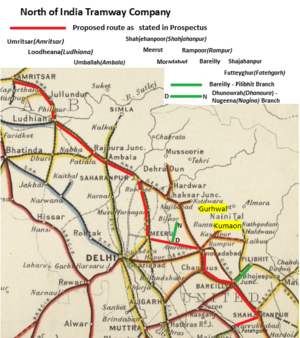 The Prospectus states that the Company will be formed by issuance of 50,000 shares of £20 giving a capital of One Million Pounds[2] and the Company objective is stated as:- “For the introducing a cheap System of Communication throughout the Province of Rohilcund(Rohilkhand) and adjacent territory, connecting the Ganges with the Indus, and also with the Iron Districts of Kumaon and Gurhwal via Futteyghur(Fatehgarh), Shahjahanpur, Bareilly, Rampoor(Rampur), Moradabad, Meerut, Saharunpoor(Saharanpur), Umballah(Ambala), Loodheana(Ludhiana) and Umritsar(Amritsar).”

Comments on Prospectus Route: (Shown as Red line on map).

The Prospectus and subsequent Reports places an emphasis on an extension to the “Iron Mines of Kumaon & Gurhwal”.
However there are no details of the proposed routes for a tramway or any estimates of cost.

The Mine was located in Khurpatal [3] , which is in the in the Kumaon Division (shown in yellow block on map).
It is clear that the ‘'North of India Tramway’ proposal was not adopted.
The following year the ’Kumaon Iron Mine’ was established and remained operational for a very short time until 1864 due to shortages of wood supplies for the smelting - see separate page.
There is no mention of any Iron Mines in this vicinity in the 1908 ‘Imperial Gazetteer’ [4]

Gurhwal (Garhwal District) is the western part of the Kumaon Division with the village of Pauri the District headquarters(shown in yellow block on map).
There is no mention of any Iron Mines in this vicinity in the 1908 ‘Imperial Gazetteer’ [5].
It is clear that the ‘North of India Tramway’ proposal was not adopted.

The ‘Rohilcund Tramway’ is the name given in the Report [6] with the following routes:-

“Commencing at the station of Futteyghur(Fatehgarh), in a northerly direction to Shahjehanpoor(Shahjahanpur), and thence to Bareilly the capital of Rohilcund(Rohilkhand), with a branch to Philibeet(Pilibhit), and ultimately to Bhurmdeo (not idenified) . From Bareilly, the line will continue in a westerly direction to Rampoor(Rampur) and Moradabad, and thence to Meerut, and ultimately to Delhi” [7]

and goes on to say

“a development southward from Shahjehanpoor(Shahjahanpur), should it eventually be deemed desirable by the authorities, the line would run through the recently acquired territory of Oude via Lucknow to Benares, where the Ganges is permanently deep” [8]

Comments on the ‘Rohilcund Tramway’ Route: It is noted that this route is a shorter version than that given in the Prospectus and has introduced branch lines. The first part is exactly the same as the ‘Prospectus Route’:-

In 1854-55 {{Henry Yule|Captain Henry Yule]], the Deputy Consulting Engineer to the Government of India, issued a Report on the practicability of the line in the Rohilcund(Rohilkhand) district, together with costs of making tramways adapted for animal traction, which the author puts as from £1350 to £2600 per mile; as well as for a railway for light locomotives at from £4350 per mile. This estimate was based on the whole of the iron would have to be brought from England. Mr Sowerby, the Engineer from the ‘North of India Tramroad Company Limited’ confirms these estimates, and adds that if if he can get iron on the spot, it will greatly facilitate the work and lessen the expenses by at least £500 to £1000 per mile, depending on the weight of the rail [9]

Mr W Sowerby, Civil Engineer, F.G.S. in his letter of 3 Apr 1857 added the following [10]:-
“I have followed with little deviation the route suggested by Captain HenryYule” ... using detailed published maps and being familiar with “the country through which the line passes. This personal knowledge with the country has enabled me to lay down the line and prepare the estimates, almost, if not quite, as correctly as if I had actually surveyed the ground for this special purpose.”

The following is a tabular statement of the places and distances:-

”The entire length of the line proposed is therefore 302½ miles(487km), and for which estimates have been prepared.”
The breakdown of the costs are then given:-
“302½ miles at £3000 (for light rails over entire length) ..... £907,500” giving a “balance of £92,500”.
He goes on to propose the Bareilly to Meerut section of 116½ miles(187km) be upgraded due to “very considerable traffic passing over it” thus requiring to heavier rails at a cost of £4,000 per mile. He then proposes deferring the ‘Nugeena Branch Line’ and other options so as to keep the expenditure below the £1,000,000 budget.
He concludes “I am aware of the existence of two other Railway Companies for making railways in Oude; but without being acquainted with the nature of their projects, it is impossible to say how far your proposed extension southwards would interfere with their plans.”