Rohilkund and Kumaon Railway (R&KR) was a metre gauge(MG) railway whose northern terminus at Kathgodam served the submontane belt of the United Provinces between Lucknow and Moradabad, as well as a number of hill stations, such as Naini Tal. 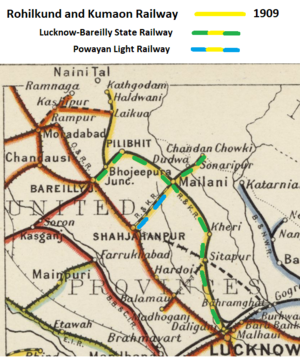 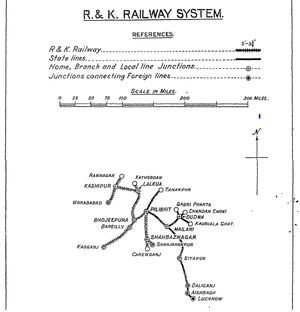 The ‘Rohilkund and Kumaon Railway Company’ started construction and working of a railway line from Bhojeepura (near Bareilly) to Kathgodam under a contract dated 12 Oct 1882. This was the original main line and opened on 12 Oct 1884 and ran 54 miles(84km) in a north-westerly direction to Kathgodam.

The R&KR also had working agreements with both the MG ‘Lucknow-Bareilly State Railway’ and the NG ‘Powayan Light Railway’. The three railways were worked using shared facilities, classified as the ‘Rohilkund and Kumaon Railway System’ but retaining separate identities. See ‘Lines Worked’ and ‘Records' below

In 1906 the R&KR extended the line from Bareilly to Soron where it joined existing MG line to Kasganj. The ‘Kasganj-Soron Section’ had been constructed by the State Government in 1885 as part of the ‘Rajputana-Malwa Railway’(RMR) ‘Cawnpore-Achnera Line ‘and in 1906 was passed to the R&KR. The extensions from Moradabad to Kashipur, Kashipur to Ramnagar and Lalkuan to Kashipur were completed by 1908 [1].

The Rohilkund and Kumaon Railway Company, Limited, was a Joint Stock Company with limited liability, having its registered office in London[5] . The company was privately owned and worked from formation in 1882

In 1883 Alexander Izat was appointed Director, prior to this he was employed by the Railway Branch - Public Works Department (PWD) where he had served in various parts of India and was instrumental in initiating and carrying out many metre-gauge extensions[6]. He represented R&KR at the Indian Railway Conference Association and remained as Director, until his retirement in 1904. In 1918 he is recorded as being R&KR Chairman with headquarters in London [3]

The R&KR remained a private Company until nationalisation in 1943 when it was amalgamated with the Bengal and North-Western Railway(B&NWR), with which it had been closely associated, and the Lucknow-Bareilly State Railway, to form the Oudh and Tirhut Railway(O&TR).

In turn, in 1952, the Oudh and Tirhut Railway became part of 'North Eastern Railway', a zone of Indian Railways.

Lines owned and operated by R&KR

Information mainly based on the “Administration Report for Railways 1918” [3].

An on-line search of the IOR records relating to this railway [9] gives many references. The most important being:-

There is a photograph dated 1911 in the British Library ‘Satow Collection’:

Officers of Rohilkund and Kumaon Railway, Feb. 1911. Group portrait of railway officials, with identifications written on mount as follows:

The R&KR officers detailed above have not been identified at the present time.